“A pure soul is the eternal servant of God as His fragmental part and parcel. He comes into contact with maya (illusion) due to the desire to lord it over maya, and that is the cause of his many sufferings. As long as he is in contact with matter, he has to execute work in terms of material necessities. Krishna consciousness, however, brings one into spiritual life even while one is within the jurisdiction of matter, for it is an arousing of spiritual existence by practice in the material world.” (Shrila Prabhupada, Bhagavad-gita, 5.29 Purport)

Sit down in peace. Clear your mind. Concentrate on hearing the sound vibration. Do you need a boom-box nearby to hear the sound? Do you need an elaborate sound system with high-end speakers? Do you even need other people around? Actually, all that is required is the ability to say to yourself the following words: Hare Krishna Hare Krishna, Krishna Krishna, Hare Hare, Hare Rama Hare Rama, Rama Rama, Hare Hare.

The three distinct words out of the total of sixteen are of Sanskrit origin, but the meaning is rather simple. “Please God, engage me in your service, forever and ever. O the energy of the Lord, please help me to remain in that service.” Just repeat this genuine prayer over and over through creating and hearing the sound vibration.

This simple practice qualifies as bhakti-yoga. It is connecting with the Divine through love and devotion. No more looking at the Almighty as a mean and angry figure with gray hair and a beard, who is looking over the population of the world with a disapproving eye. No more viewing the origin of all things as the best order supplier to meet the sense demands, which change each day. No more thinking that the Personality of Godhead is an abstract, just a concept to trick the mind into finding peace.

Bhakti-yoga is the real thing, but why would a person be hesitant to try it? Chaitanya Mahaprabhu says that a person who receives the seed of the creeper of devotional service, bhakti-yoga, is highly fortunate. They get the blessing from God Himself and His bona fide representative, the spiritual master. Why would a fortunate person throw away that blessing by not following up? Why would a person not want to put the effort in to see the creeper blossom into a beautiful tree, with branches and leaves that give shade to other souls as well?

1. It’s a sacrifice to do something that doesn’t accumulate money

I stayed late at the office last night. I didn’t want to. Trust me, I would much rather have been at home relaxing with my family. But I had no choice. There was a deadline. This work had to get done. If our company doesn’t come through for the clients, those same clients will take their business elsewhere. Eventually, everyone at the company will be unemployed and be looking for ways to support themselves.

In the material world to do anything that would jeopardize the accumulation of wealth is thus considered a great sacrifice. In the fever to guard against indigence, the otherwise sober human being doesn’t realize that the lesser intelligent animal species already get enough food. They may not live as long, and they may not have the best defense mechanisms, but they generally do alright. At the very least, they do not worry about income inequality, as they have no concept of it.

Moreover, such a great opportunity is squandered if the human being doesn’t inquire about their true nature. If money were the greatest blessing in life, then the people who have it would be the happiest in the world. They would never succumb to depression, drug addiction, or divorce.

2. It takes time to travel to a house of worship and congregate with like-minded people

At least once a week I have a chance to practice bhakti-yoga. There is a house of worship in my area, where the people not only pray but discuss matters in depth. There are other fortunate souls who go there to advance in their practice. Like an afterschool club, a trade association, or a recreational sports team, the people attending have a shared interest. All I have to do is associate with them.

The problem is that it takes time out of the day. It is a sacrifice to make something like that the highest priority, especially if the meeting falls on a day typically reserved for relaxation. It’s bad enough I have the renewing deadline of going to the office each morning looming over my head. Why would I want to add another obligation, especially if it doesn’t benefit me financially? In fact, the people at this group go around asking for money, as they subsist on donations.

3. I know that material life will be left behind someday

I’m familiar with some of the main philosophical points in bhakti-yoga. Work with detachment. Don’t be bewildered by birth and death, which are nothing more than the acceptance and rejection of bodies. In fact, the body changes all the time, from boyhood to youth and so on. Do your duty, but don’t be attached to the fruits.

“You have a right to perform your prescribed duty, but you are not entitled to the fruits of action. Never consider yourself to be the cause of the results of your activities, and never be attached to not doing your duty.” (Lord Krishna, Bhagavad-gita, 2.47)

Some of the people I know to be serious in bhakti-yoga have quit their job, left their family, and moved into the house of worship. They did these things to be able to practice full-time. I won’t admit it out loud, but I’m kind of scared by this. Maybe the more I advance in devotional service, the more I will leave material life behind. I am not ready for that yet. I already find myself caring less and less about things that used to be so important to me. I think I’ve even heard the “Hare” addressed in the maha-mantra complaining that once a person becomes attached to Krishna, they lose things that are dear to them, like friends and family.

“’In My opinion, Shrimati Radharani continued, ‘one should not hear about Krishna, because as soon as a drop of the nectar of His transcendental activities is poured into the ear, one immediately rises above the platform of duality, attraction and rejection. Being completely freed from the attraction of material attachment, one gives up the attachment for this material world, family, home, wife, children and everything which is materially dear to every person. Being dispossessed of all material acquisition, one makes his relatives and himself unhappy.’” (Krishna, The Supreme Personality of Godhead, Vol 1, Ch 46)

4. I might not get what I want from Krishna

Bhakti-yoga comes from the Vedas, which are the ancient scriptures emanating from the area today known as India. Those who follow Vedic traditions are also known as Hindus. I’ve seen that Hindu people often worship other gods, divine figures who are not Krishna, Vishnu, or Rama. From talking to them, I see that they’re asking things from these gods. They want money, good fortune, learning, or obstacles cleared from their path.

“Demons have lost all intelligence because they do not know what is actually their self-interest. Even if they have information of the Supreme Personality of Godhead, they decline to approach Him; it is not possible for them to get their desired boons from the Supreme Lord because their purposes are always sinful. It is said that the dacoits in Bengal used to worship the goddess Kali for fulfillment of their sinful desires to plunder others’ property, but they never went to a Vishnu temple because they might have been unsuccessful in praying to Vishnu.” (Shrila Prabhupada, Shrimad Bhagavatam, 3.19.1 Purport) 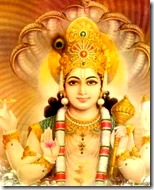 I know that the Supreme Lord Himself can say “no.” One example was the time Narada asked to be married to a beautiful princess, who was allowed to choose her husband from any of the men appearing at an assembly. Narada is a great spiritual master of the Vedic tradition. He is synonymous with bhakti-yoga. Vishnu did not agree to this request. In fact, He created the situation that allowed Narada to make the request. It was a way to teach others. Why, then, should I approach the Supreme Lord in bhakti-yoga? I know that He might not give me what I want as far as material desires go.

5. Envy of God; the reason for birth in the material world

Everyone is in this material world due to envy of the Supreme Lord. It is an unfortunate truth. Proof can be seen in the widespread disdain of religion and all things God. There are many cheaters who have ruined the experience for the genuine seekers, but if a person really wanted to serve God without motive and without interruption, the opportunity is open to them.

Rather, the envy leads to a chase to be the undisputed champion of different areas of opulence like beauty, wealth, strength, and fame. Sadhus even contest to see who is the most renounced. As long as the attitude remains, the association of God the person will stay far away. 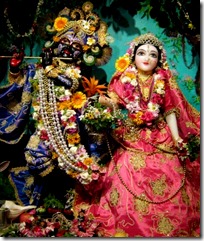 Fortunately, all the obstacles in the path of advancement can be gradually cleared through following bhakti-yoga itself. Soon the person realizes that money is not everything. They are willing to sacrifice so much time since there is enjoyment in hearing the sound vibration that is identical to God. Their fears reverse in nature. Instead of worrying about leaving behind the material world, they worry over what life will be like if they don’t get to practice bhakti-yoga. They don’t worry about Krishna rejecting their desires anymore since their lone desire is to continue in bhakti. Their envy turns to love and devotion, and once established in that sublime position they never want to return to the fearful world of repeated birth and death.

Of Vishnu’s discrimination I know,

That sometimes to my requests to say “no.”

For visiting temple sacrifice in time to give,

Envy of the Supreme Lord at the heart,

To lord it over mentality at the start.

Through bhakti itself everything cleared,

No more concern over that which previously feared.