“Humility, pridelessness, nonviolence, tolerance, simplicity, approaching a bona fide spiritual master, cleanliness, steadiness and self-control; renunciation of the objects of sense gratification, absence of false ego, the perception of the evil of birth, death, old age and disease; nonattachment to children, wife, home and the rest, and evenmindedness amid pleasant and unpleasant events; constant and unalloyed devotion to Me, resorting to solitary places, detachment from the general mass of people; accepting the importance of self-realization, and philosophical search for the Absolute Truth – all these I thus declare to be knowledge, and what is contrary to these is ignorance.” (Lord Krishna, Bhagavad-gita, 13.8-12)

Those who are not very familiar with devotional service, bhakti-yoga, relegate it to a practice of a sentimental nature, the vehicle of choice for the less intelligent.

“If they had more intelligence, they would follow Vedanta. They would become immersed in the high philosophy, accept the renounced order of sannyasa, and from there advance on the path towards mukti, or ultimate liberation.”

In fact, devotional service is for the most intelligent class of men. All good qualities come as a result of connecting with the Divine in a mood of love and devotion. The Bhagavad-gita confirms this through a single verse, wherein Shri Krishna mentions that humility is equivalent with knowledge. Devotees have great humility, and it is rooted in knowledge.

How is humility related to knowledge? One example we can take is from the Autobiography of Benjamin Franklin. A statesmen who lived in 18th century America, Franklin was famous for many things. What probably earned him the most respect around the world was his discoveries in science. Not a scientist by profession by any means, Franklin’s higher than usual curiosity led to important discoveries relating to electricity.

Yet when the famous Founding Father took to writing his autobiography, the scientific achievements were barely mentioned. There is a recommendation to consult the writings of his friend Joseph Priestly, for anyone who is interested. Historians and biographers have studied Franklin ever since his time, and many of them are astounded that he would discuss so briefly things that earned him repute around the world.

The humility is easy to understand for a person in knowledge. They know that even great achievements don’t come about through personal endeavor alone. Like the American football player dancing in the end zone after scoring a touchdown, a person who boasts excessively fails to give proper credit to outside factors.

For the curious scientist, there is the work of previous scientists. There is the material nature itself. If I discover that electricity is the same as lightning, surely that information is valuable to others. At the same time, electricity was always the same as lightning. My discovering the link hasn’t changed any of the properties of material nature. The wise person would give greater credit to the intelligent being behind the amazing creation. 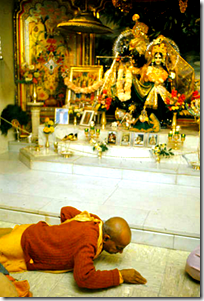 As Shri Chaitanya Mahaprabhu says, through a humble state of mind a person is fit for always chanting the holy names of the Lord, kirtaniyah sada harih. Chanting the holy names seems like an activity based on sentiment. You’re singing, “Hare Krishna Hare Krishna, Krishna Krishna, Hare Hare, Hare Rama Hare Rama, Rama Rama, Hare Hare,” with love and devotion. You’re attracted to the all-attractive one, the wielder of the flute, the lifter of the massive Govardhana Hill, the Lord of the life breath of Shrimati Radharani.

A person can only be in a humble state of mind if they have knowledge. The ignorant think that everything happens as a result of personal effort alone. They are unaware of the three miseries of life. For success in any venture, I need the forces of nature to cooperate. I need to be free of disease from within, and I need other living entities to not get in my way. I am not in control of any of these factors. The thing we refer to as luck is actually tied to these three miseries.

By following devotional service a person gradually merges into a state of being that is equivalent with knowledge. There is humility. There is respect for teachers of the bhakti path. There is a steady state of mind, through good and bad. There is detachment from even things that are the most likely candidates for attachment, such as friends and family. Knowledge comes about through connecting intimately with the most knowledgeable, the Supreme Lord. While deprecating themselves, the devotees elevate Shri Krishna and those who serve Him to the highest stature.

Of my accomplishments proud,

But to happen must first be allowed.

Not every result occurring because of me,

Cooperation of higher authorities must be.

Humility and knowledge a natural pair,

Since real nature of luck aware.

Though for themselves deprecation,

For devotees and Krishna elevation.