Home › conversations › My Sentiment Is Better Than Yours

My Sentiment Is Better Than Yours

“Religion without philosophy is sentiment, or sometimes fanaticism, while philosophy without religion is mental speculation. The ultimate goal is Krishna, because the philosophers who are also sincerely searching after the Absolute Truth come in the end to Krishna consciousness. This is also stated in the Bhagavad-gita. The whole process is to understand the real position of the self in relation to the Superself.” (Shrila Prabhupada, Bhagavad-gita, 3.3 Purport)

Friend1: Do you ever get tired of explaining Krishna consciousness?

Friend1: I understand that explaining is kirtanam, which is chanting. Chanting and discussing, empowered by authority, are the same thing. I know that.

Friend2: Right. Kirtanam is not just chanting congregationally. It can surely be, enjoying the maha-mantra with a group: Hare Krishna Hare Krishna, Krishna Krishna, Hare Hare, Hare Rama Hare Rama, Rama Rama, Hare Hare. But it doesn’t have to be limited to that. Explaining should be blissful, since you are describing the all-attractive one.

Friend1: Whose glories are endless. Yes, I know. Ananta Shesha Naga, with his unlimited hoods, has been glorifying God since before anyone can remember. He has yet to finish. The creator Lord Brahma, and the destroyer, Lord Shiva, also glorify in an inadequate way. What, then, to speak of a lowly person like me?

Friend2: There you go. This is not a criticism of them. It’s to show that there is always more to say. Moreover, that inconceivability in God, achintya, and the immeasurability of His features, Adhokshaja, are a real blessing.

Friend1: Let me get more specific. What I am tired of is trying to defend the philosophy to people who have none.

Friend1: The philosophy is pretty straightforward. We are spirit souls. We are not matter. The body is matter. The soul goes through the cycle of birth and death, also known as reincarnation. The human form is ideally the last stop in the spiritual evolution of the individual. The human form is the best for understanding God, which is the ultimate purpose of an existence.

Friend1: Yeah. I shouldn’t have to defend anything. No other spiritual tradition has information like this. The only arguments against are sentimental.

Friend2: Dogmatic insistence. Yeah, nothing you can do with that. If they think we’re all condemned to hell if we don’t accept such and such as the savior, then there’s no point in proceeding with the discussion.

Friend1: Okay, so I think what I am asking is why is there a need for discussion.

Friend2: Not sure what you mean.

Friend1: Why do I have to engage these people at all? So many of them come back with an argument that essentially means, “My sentiment is better than yours.” 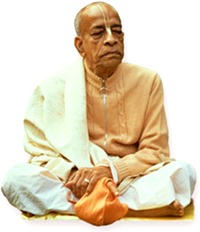 Friend2: His Divine Grace A.C. Bhaktivedanta Swami Prabhupada brilliantly states that religion without philosophy is just sentiment. And philosophy without religion is mental speculation. You need both religion and philosophy in order to reach perfection.

Friend1: Right, but even on the sentiment platform Krishna consciousness is superior. He is the all-attractive one, after all. I’ve only been in churches a few times, and let me tell you the atmosphere doesn’t compare to a Vishnu temple. It’s no contest.

Friend1: In the church it feels like you are going to a place to be punished. Stand in line and say you’re sorry or else. At the Vishnu temple, one where there isn’t harassment from the corrupt priests for money, the atmosphere is very loving. Be attracted to God and His transcendental form. Stay always with Him. Realize that evidence of His attractiveness is everywhere. That’s why I say even when playing on the sentiment field, the other competitors lose bigly. 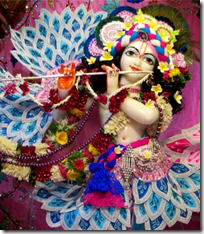 Friend2: I understand what you are saying, but it’s not about winning or losing. You spread the glories of bhakti-yoga since it is the best way to live. Practically the entire world is in darkness. They speculate about the origin of life. They give nature, an impersonal force, the top standing. Even the religious live off of mass killing of innocent animals. There is no proper understanding anywhere. You are fortunate to have come across the spotless teachings of the Vedas. You have an opportunity to bring the same happiness to others. Most will reject you, but imagine if a few don’t. What will be the effect? If Narada, Vyasadeva, Valmiki, and so many other saints didn’t work for the welfare of mankind and future generations just imagine where we would be today.

Light only this way to shine,

Superior is sentiment of mine.

Arguments over religion this way indeed,

Useless with philosophy to proceed.

And how from human life rebirth no more.

But still worthwhile to explain,

Since potential for highest gain.

Like Loading...
‹ Shouldn’t I Try To Learn Something From Every Religion
Five Symbolic Aspects Of The Bhagavad-gita ›