Home › the five › Five Symbolic Aspects Of The Bhagavad-gita

Five Symbolic Aspects Of The Bhagavad-gita

“The emblem of Hanuman on the flag of Arjuna is another sign of victory because Hanuman cooperated with Lord Rama in the battle between Rama and Ravana, and Lord Rama emerged victorious. Now both Rama and Hanuman were present on the chariot of Arjuna to help him. Lord Krishna is Rama Himself, and wherever Lord Rama is, His eternal servitor Hanuman and His eternal consort Sita, the goddess of fortune, are present.” (Shrila Prabhupada, Bhagavad-gita, 1.20 Purport)

Authority is what allows knowledge to proceed. Imagine you are a first grade school teacher. You are ready to provide instruction on things like simple addition and the alphabet. One problem. No one in the class will listen. They challenge everything you say. They don’t respect you. They refuse to acknowledge authority. How, then, will they learn?

In Vedic culture there is something called parampara. It is translated as “disciplic succession,” which is consulting the highest wisdom through a chain of authority. The first link in that chain is the Supreme Himself, the birth-less and deathless one. Of course the information has to be accepted on faith at first, but not blindly. Apply your intelligence. Share your doubts. Continue to progress on the path, and eventually you’ll become just as enlightened as your teacher, ready to spread the same knowledge to others.

One of the dangers of bypassing parampara is misinterpretation. Take the Bhagavad-gita for example. It is a sacred text nestled inside of a larger, also revered text known as the Mahabharata. The Bhagavad-gita is essentially a conversation. Parampara says that the conversation actually took place, that the work is like a transcript of a historical event.

If this vital fact is not accepted, then there is little value derived from reading the work. One of the resulting misinterpretations is that the Bhagavad-gita should be viewed in a symbolic way only. The truth is that the Supreme Lord is such an expert artist that even in His pastimes on this earth He gives plenty of symbolic meaning, which can be found in His conversation with Arjuna as well.

The living entities in this world are struggling. There are the six senses, which include the mind. The soul within is atma. Since that soul can be associated with maya, or illusion, it is known as jivatma. For crossing the ocean of birth and death, jivatma needs the help of the higher soul, Paramatma.

“This divine energy of Mine, consisting of the three modes of material nature, is difficult to overcome. But those who have surrendered unto Me can easily cross beyond it.” (Lord Krishna, Bhagavad-gita, 7.14)

The symbolic representation of both the struggle and the rescue is found in the Bhagavad-gita in the form of the two main speakers. Arjuna represents jivatma, as he is in distress and not sure of what to do. Krishna is Paramatma Himself, the Supersoul pervading every space in existence. He is also within the heart, but His same identity is distributed everywhere, whereas jivatma is limited to the local space.

Parampara continues through the relationship of disciple and guru. The jivatma gets help from Paramatma within, but there first has to be help in learning how to consult Paramatma. The same Divine is represented on the outside through the guru, or spiritual master.

While acting as guru Himself, Krishna gave the advice that a person should seek someone who has seen the truth. The truth-seer can then impart wisdom to the disciple, provided the disciple is humble and inquisitive.

In the situation of the Bhagavad-gita, Arjuna is the symbol of the disciple and Krishna the guru. Arjuna had the most significant doubts a person can have. They were about the very reason for living. Why should we act a certain way if death is certain? Why should we enjoy at the cost of others? What happens if we don’t achieve perfection in consciousness in this lifetime? As the bona fide guru, Krishna was there to answer each question properly and to the satisfaction of the disciple.

3. The flag of Hanuman

The setting is a battlefield. Arjuna is about to begin hostilities in one of the greatest wars of all time. Kurukshetra is about to see millions of deaths. Arjuna is the greatest bow-warrior in the world. He is in essence a servant of God, as after raising his doubts he proceeds only at the direction of Krishna Himself. 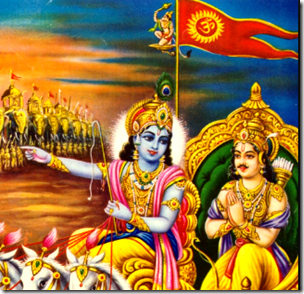 Arjuna’s chariot is decorated with the flag of Hanuman. This is the symbol of another great servant of God. Shri Hanuman previously battled fearlessly to help Shri Rama, an incarnation of Krishna who appeared on earth many years prior. One devotee, Arjuna, was seeking the help of a previously successful devotee, Hanuman. Of course the flag was more than just a symbol, as Hanuman had told Arjuna’s brother Bhima that he would appear on the chariot in the form of the flag and add in the shouts of the victorious side.

On that chariot Brahman is represented by Arjuna, and he is temporarily in maya. He wants to avoid the conflict for the sake of loved ones fighting for the other side. He posits the idea that by quitting, they will live happily. He will be the bigger person, by giving up and retreating to the forest.

Arjuna returns to the Brahman-realized state after consulting Krishna, who is also symbolic of Parabrahman. Arjuna becomes brahma-bhuta and more by following bhakti, full devotion to God.

By following bhakti there is full protection. The key is surrender. Abandon every system known to man that helps to bring a temporarily favorable condition. Just believe in God the person, proceed forward, and don’t fear.

“Abandon all varieties of religion and just surrender unto Me. I shall deliver you from all sinful reaction. Do not fear.” (Lord Krishna, Bhagavad-gita, 18.66)

The idea is nice in theory, but the Bhagavad-gita gives both a factual and symbolic representation of it. Arjuna represents full surrender in bhakti, and Krishna’s guidance on the chariot is the protection. So many souls have since followed Arjuna’s path and received the highest benefit as a result. Indeed, simply having attachment for that sacred conversation, with the proper identification of both speakers, releases a person from the cycle of birth and death.

Though from many a misinterpretation,

Guru and the disciple with doubt,

Jiva and Paramatma illusion without.

Flag of Hanuman on chariot flying,

Abandon and protection indeed to come,

From Krishna’s grace that victory won.