“Hiranyakashipu had four wonderful, well-qualified sons, of whom the one named Prahlada was the best. Indeed, Prahlada was a reservoir of all transcendental qualities because he was an unalloyed devotee of the Personality of Godhead.” (Shrimad Bhagavatam, 7.4.30)

One man’s food is another man’s poison. What is valuable to one person may not be so for another. What one person is willing to spend a significant amount of money on another person would rather pass. In the land of duality, even gold can be found in the unlikeliest of places. On the occasion of Narasimha Chaturdashi, we honor a golden-like child who once appeared in a Daitya family.

“Among the Daitya demons I am the devoted Prahlada; among subduers I am time; among the beasts I am the lion, and among birds I am Garuda, the feathered carrier of Vishnu.” (Lord Krishna, Bhagavad-gita, 10.30)

In the Bhagavad-gita Shri Krishna says that among the Daityas He is Prahlada. A Daitya is both a race of living entities and also a classification based on the type of character. Think pious and evil, good and bad. We see that some children are naturally good. They obey the law. They listen to the adults. They don’t steal.

Other children are just the opposite. They go out of their way to do the wrong things. They are fearless in their transgressing of the rules of propriety. These different natures are there from birth, and that nature is often inherited from the prior generations.

“The transcendental qualities are conducive to liberation, whereas the demonic qualities make for bondage. Do not worry, O son of Pandu, for you are born with the divine qualities.” (Lord Krishna, Bhagavad-gita, 16.5)

Hiranyakashipu was the king of the world a long time ago. He was a Daitya by both quality and birth. There were two sisters, Diti and Aditi. Aditi gave birth to the demigods, who are also known as suras. Diti became the mother of the demons, who were known as Daityas. Since a demon is the opposite in quality of a demigod, they also go by the term asura.

Hiranyakashipu received the favor of the first sura, Lord Brahma. The king became so powerful that he could rule the world without lifting a finger. Sometimes the threat of force is enough. If you see a massive army huddled in front of your house, it’s probably not a good idea to engage in conflict. The potential for violence is enough to alter behavior.

Others suffered for his glory. Hiranyakashipu couldn’t just ascend to power by himself, leaving the innocent alone. What is the point of being king if others don’t fear you? At least this was part of his thinking. The demigods were so afraid, but they got relief from the assuring words of the Supreme Personality of Godhead. He explained that the king would meet his end after harassing the son named Prahlada.

Why would the father go against the son? How did God know this would happen? Though born a Daitya, Prahlada was like a sura in quality. In fact, he is described to be upasakah, which means “worshiper” or “devotee.” Hiranyakashipu worshiped only his senses. In the back of his mind he believed in God, but he viewed the Almighty as the greatest enemy.

The friend of my enemy is also my enemy, and in this way Prahlada fell into bad favor with the king. Hiranyakashipu did not like that Prahlada was so devoted to the Supreme Lord, who is also known as Vishnu. The king maintained the Daitya character. It was the son who was different. He was not interested in money, wealth, or fame. 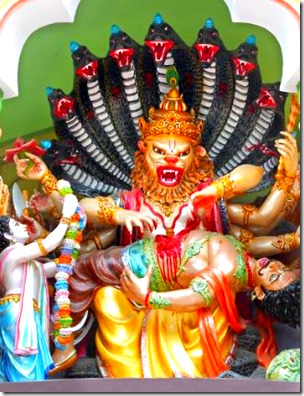 Prahlada was ready to accept untold suffering, if it meant Vishnu would be further glorified. Hiranyakashipu already caused so much suffering to others simply to increase his own glories. The two paths eventually crossed. Vishnu had enough of the harassment inflicted on the innocent Prahlada. For Hiranyakashipu, He reserved a most wonderful form. On Narasimha Chaturdashi, we remember that half-lion/half-man incarnation, who tore the aggressor Hiranyakashipu to pieces using just nails, all while being garlanded by the devoted Prahlada, who was gold found in the unlikeliest of places.

Daitya since in family coming,

But never of that nature becoming.

Through boons from death buffering,

For king’s rise others suffering.

But child steady and quiet remaining,

Like Loading...
‹ Three Questions For A Person Claiming To Be A Messenger Of God
Three Reasons God Is A Somebody ›