“Sometimes mother Yashoda used to ask Krishna to bring her a wooden plank for sitting. Although the wooden plank was too heavy to be carried by a child, still somehow or other Krishna would bring it to His mother. Sometimes while worshiping Narayana, His father would ask Him to bring his wooden slippers, and Krishna, with great difficulty, would put the slippers on His head and bring them to His father. When He was asked to lift some heavy article and was unable to lift it, He would simply move His arms. In this way, daily, at every moment, He was the reservoir of all pleasure to His parents.” (Krishna, The Supreme Personality of Godhead, Vol 1, Ch 11)

God can do anything. If He is the origin of this universe, He is responsible for the amazing wonders that are everywhere. Something as commonplace as birth is considered a miracle. Out of nowhere a child appears within the womb and gradually begins to develop. The first time mother-to-be has no prior experience to consult. They have to suffer through the difficulties of morning sickness, loss of appetite, and pain in the stomach. The end result is a brand new life, totally dependent on the parents.

The entire manifest world can be considered in the same light. There is the unmanifest material substance, known as pradhana. The Supreme Lord simply glances over the pradhana and the three modes of nature result, with the process of creation beginning. Subsequent is maintenance, followed eventually by destruction.

As He says in the Bhagavad-gita, Shri Krishna, the Supreme Personality of Godhead, is the source of both material and spiritual worlds. One is manifest and the other unmanifest, perpetually. The spiritual world has a different kind of nature, which is ever-existing. 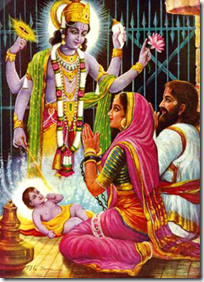 Shri Krishna descends to this world from time to time. The occasion of Janmashtami celebrates the day He emerged from the womb of mother Devaki in Mathura. Since He is always God, no matter which form He chooses to display, Krishna is able to do amazing things.

He spent the childhood years in the farm community of Vrindavana. Though giving the visual of an innocent and dependent child, He survived one miracle after another. At least this is how the residents treated the incidents. Krishna withstood being served poison by a witch named Putana. He survived being taken high into the sky by an evil character who could transform into a whirlwind. He brought down two large trees by Himself, but somehow escaped harm as they fell near Him.

Krishna has opulences that span both sides of a sliding scale. He is the most powerful and He can also show weakness. The latter is with the intent of increasing the joy of the devotees, who are so dear to Him. In Vrindavana mother Yashoda would sometimes ask young Krishna to bring a wooden plank. The Lord struggled to fulfill the desire, staying adorable throughout. 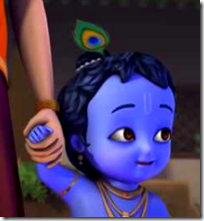 Krishna would sometimes bring the slippers to the father Nanda, again struggling in the process. A fruit vendor would visit the house, and Krishna would imitate the parents by bringing grains to her as payment. The problem was that the grains would slip out of His tiny, lotus-like hands.

In each case the people on the receiving end would take so much delight. There was relief when Krishna escaped the attacks of the wicked asuras sent to Gokula by the king of Mathura, Kamsa, and there was great joy as the same child tried to perform everyday tasks.

To this day the same experience is available to anyone who is sincerely devoted to that delight of the town, Gokulananda. The occasion of Janmashtami brings the opportunity to remember the Supreme Lord, the all-attractive Shri Krishna, who is both greater than the greatest and smaller than the smallest. He simultaneously rids the world of evil elements and carries out menial tasks, delighting devotees young and old alike.

To old and young bringing delight.

All-attractive one, of Krishna the name,

On Janmashtami day His appearance celebrating,

Love for devotees in Vrindavana demonstrating.