“The Lord’s uncommon features, uncommon activities and uncommon beauty can be perceived even by an ordinary man. For example, when Lord Krishna appeared just like a six- or seven-year-old boy in Vrindavana, He was approached by the residents there. There were torrents of rain, and the Lord saved the residents of Vrindavana by lifting Govardhana Hill and resting it on the little finger of His left hand for seven days. This uncommon feature of the Lord should convince even materialistic persons who want to speculate to the limit of their material senses.” (Shrila Prabhupada, Shrimad Bhagavatam, 4.7.32 Purport)

It’s a little difficult to believe at first. A small child, lifting up a hill, and then holding it up for seven straight days. Not mere fun, not a way to test out strength, but in the moment of sheer panic for others, a dire emergency, the Supreme Personality of Godhead both receives the 9-1-1 call and rushes to the rescue.

Vyasadeva, the compiler of a significant portion of Vedic literature, which is the foundation of what passes today as Hinduism, was not a fiction writer. He was a realized soul, so he did not need to make up anything for his own amusement. He took the recollections of others and organized them into book form in the Sanskrit language. His own recollections and experiences are passed on as well.

If a person has a difficult time believing that events like Govardhana-lila took place, there is still value in hearing. Many lessons are taught simultaneously by the amazing work of Shri Krishna.

1. The inferior nature of demigod worship

Hinduism is known for its many gods, devas in Sanskrit. There are too many to count, though many are depicted in pictures and paintings. So many continue to be worshiped to this day.

During Krishna’s time in one area there was focus on Indra, the king of heaven. He received an annual puja in his honor, conducted by the residents of the farm community of Vrindavana. The people were very respectful of the authorities in Vedic culture. They worshiped as per tradition, understanding that a pleased Indra would reciprocate by providing sufficient rainfall.

The people had Krishna with them, whose association was more significant. When you have God with you, nothing else is needed. If you are afraid that something bad will happen by ignoring tradition, Krishna is there to put the mind at ease.

Not only are the rewards of such worship temporary in nature, the people being worshiped don’t automatically become more favorable as a result. Indra did not offer any sort of forgiveness to the people of Vrindavana skipping his worship. He extended something better described as the loyalty punishment.

He was so jealous that Govardhana Hill was worshiped instead at Krishna’s insistence that he felt the need to retaliate with a devastating rainstorm, the likes of which would wipe out a city and its people in any other circumstance. Through Krishna’s subsequent protection the lesson was taught that demigod worship is not required.

Not only is God fit to be worshiped, but so is anything directly associated with Him. This includes His land. Vrindavana is sacred precisely because bhakti flourishes there. Bhakti is prominent because the residents are always thinking of Krishna. That consciousness is partly inherited from past generations, who at one point were graced with Krishna’s direct association.

As God is worshipable, so is His land. The first Govardhana Puja illustrates this. The people brought the best preparations of food to the hill, offering with love. There was no doubt as to what to bring, since Krishna directed everything.

“The cowherd men then inquired from Krishna how He wanted the yajna performed, and Krishna gave them the following directions. ‘Prepare very nice foodstuffs of all descriptions from the grains and ghee collected for the yajna. Prepare rice, dahl, then halavah, pakora, puri and all kinds of milk preparations like sweet rice, sweetballs, sandesha, rasagulla and laddu and invite the learned brahmanas who can chant the Vedic hymns and offer oblations to the fire.’” (Krishna, The Supreme Personality of Godhead, Vol 1, Ch 24) 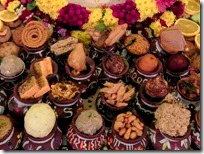 To make sure no one doubted the authenticity of the process, Krishna assumed the identity of the hill and spoke to the residents. He acknowledged the worshipers and directed that the same worship be conducted annually. That amazing formation of land is still found in this world, in the same place, in Vrindavana. Even if a person creates a replica of the hill on a much smaller scale, when the worship is done with the proper mood the same benefit is there: increased devotion to God.

3. You can extend full trust to Krishna

This was an emergency situation. Indra sent the cloud normally reserved for the end of creation. This means a ton of rain, more so than any hurricane striking land in recent times. There could have been doubt. The people trusted Krishna’s direction in worshiping Govardhana. Now they were threatened with instant death as a result.

There was nothing to fear. Full trust and faith can be extended to God. He will protect from all dangers. In this case He solved the problem by lifting the just worshiped hill. The land that was non-different from Him became physically linked to Him for seven days.

The location on which the hill rested when it acted like an umbrella is no accident. After lifting the hill, Krishna placed it on the pinky finger of His left hand. This is the typically non-dominant hand; meaning weaker. The pinky is known to have the least strength of the five fingers. 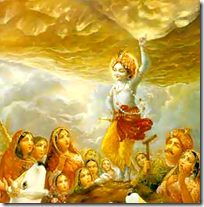 God is so strong that He can do amazing things with something that is typically considered weak. If His pinky is this strong, imagine how much strength is there in Krishna’s arm? And these are visuals for our understanding only. God’s strength is actually beyond comprehension, and He is willing to apply that strength for the protection of the devotees.

Full faith in Him to extend,

Arm from pressure not to bend.

Since on pinky finger strong,

Where one day pleased then another enraged.

Worshipable too His land,

Place on which Krishna to stand.

Like Loading...
‹ Why Would Anyone Go To Indra After The Govardhana Incident
Four Activities Accounted For Through Charanamrita ›