Home › the four › Four Devotees Who Didn’t Hold A Grudge

“Tulsi says that one who has love for Rama should be friendly towards friends, renounce enmity with enemies, and be easy-going, simple in nature, quiet, and equally disposed towards all.“ (Dohavali, 93)

Forgive, but don’t forget. Let go of the incident, but remember the person’s character. In this world the rule is dog eat dog; at least that has been the experience so far. If you don’t look out for yourself, who will? Every person is focused on svartha, or self-interest. Paramartha maybe, but that only for personal gain in the afterlife. It is seen that family members will turn against each other if the desire to satisfy the senses is strong enough.

In spite of how easy it is to hold a grudge, a person who has love for the Supreme Personality of Godhead eventually lets go of enmity. They stay friendly with friends. In fact, they never forget a good deed done in their favor. They inherit this trait from the person they worship, thinking of Him twenty-four hours a day.

Devotees stay simple, generally quiet, and steady through the ups and downs. In this regard there are saintly figures from the past whose tolerance was tested to the extreme.

This king fits the description from the Dohavali of Goswami Tulsidas perfectly. His behavior was ideal, and he worshiped Bhagavan constantly. One time Durvasa Muni came to the palace as a guest. The sage went to take bath, and prior to returning Ambarisha broke a fast he was following. Not even a mistake really, but more of a misunderstanding, when Durvasa returned he became infuriated. He was ready to kill Ambarisha. 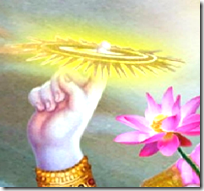 Bhagavan protects His devotee, and so seeing this incident Lord Vishnu sent His sudarshana-chakra to the scene. This beautiful, spinning disc then followed Durvasa Muni wherever he went. It was like a heat-seeking missile. Eventually, Durvasa went to Vaikuntha to see if Vishnu would provide relief. The Supreme Lord advised the sage to ask forgiveness from the person he had offended. Ambarisha, for his part, was not upset at all. More ashamed that someone was suffering so much because of him, the king immediately pardoned the offending Durvasa.

The son of a Daitya king, Prahlada suffered so much. He was not an adult, so there weren’t many recourses for protection. The boy relied on the only thing he knew: meditation on Bhagavan. That saved him from death in many situations, caused by the jealous father. Hiranyakashipu eventually met death Himself in the form of Narasimhadeva, who was Vishnu appearing in a special form. In spite of the atrocities committed by the father, Prahlada later asked for his pardon.

The eldest of the five Pandava brothers, Yudhishthira was no stranger to danger. The miraculous escapes were due to the intervention of Shri Krishna, and the instigator of the peril was the Kaurava family, headed by Duryodhana. That wicked character was the eldest son of Dhritarashtra, who was Yudhishthira’s uncle.

At the appropriate time the sinners received their appropriate fruit, which was ghastly. The Kauravas were wiped away, and the Pandavas victoriously returned to the throne of Hastinapura. Yudhishthira did not hold a grudge. He knew that Dhritarashtra was involved in the many previous attempts to kill his brothers, but Yudhishthira still took care of the elderly uncle, treating him as if he were a well-wisher within the family.

The shared wife of the five Pandava brothers, she suffered the terrible tragedy of having her sons killed in cold blood. The offender was Ashvatthama, who was later caught by Arjuna and brought before the grieving mother. The just punishment was to kill the murderer. Yet Draupadi forgave him, having compassion upon the guru, who was dear to the family. Ashvatthama was a son of that guru, and so Draupadi did not want to be a party to further pain and heartache. She felt the separation of losing her sons, so she considered the impact of slaying someone else’s son.

Of course punishment has its rightful place. Just because a devotee is forgiving it doesn’t mean that they are naïve. A tiger is a tiger, a snake is a snake. Simply put, there are bad people out there. Still, for a person who loves the Supreme Lord there is never lasting enmity. There are no grudges, because the sole focus is on how to keep the eternal smile on the transcendental face of their beloved, who is connected to every individual in the heart as Paramatma.

Meditating on him day’s end to start,

Since connected to everyone through heart.

So devotee naturally forgiving to be,

Despite past murder attempts making.

Like Loading...
‹ Why Does Martya-Loka Only Refer To Earth
Three Ways To Understand The Greatness Of Lord Shiva ›