Three Ways Forgetfulness Can Be Beneficial In Bhakti-Yoga

“I am seated in everyone’s heart, and from Me come remembrance, knowledge and forgetfulness. By all the Vedas am I to be known; indeed I am the compiler of Vedanta, and I am the knower of the Vedas.” (Lord Krishna, Bhagavad-gita, 15.15)

“I very well know the verse from the Bhagavad-gita explaining the source of remembrance, forgetfulness and the like. I understand that the verse is most often used to explain how the different species inherently know how to do things, like the animals being able to walk immediately after birth, and the infant going through an expected cycle of development.

Yes, yes, Shri Krishna, the Supreme Personality of Godhead intentionally allows for forgetfulness in order to fulfill the flawed desire of wanting to enjoy without Him. With my situation, I want to remember. I’m trying bhakti-yoga in earnest. I just seem to forget a lot. I can’t remember all the details of the lila, or pastimes. I can’t explain the stories to those who don’t know, without referencing the books or refreshing my memory. Am I doing something wrong?”

As Goswami Tulsidas says in the Dohavali, Shri Rama is gariba nivaja, the protector of the poor.

“The one who never even received broken currency, who was so poor and nobody wanted – Tulsi says that Shri Rama, the protector of the poor, has made him worth so much.” (Dohavali, 108)

Poverty doesn’t have to be limited to the bank balance, i.e. how much money you have. There can be deficiency in a host of areas, but the devotee should not worry. The Supreme Lord will protect. The effect of connecting with Him in a mood of love is so powerful that even something that is typically considered negative becomes auspicious.

1. Excuse to connect again through lila

Can’t remember the pastimes? No problem. Just read them again. They are beautifully presented in works like the Mahabharata, Bhagavata Purana and Ramayana. Indeed, forgetfulness here provides a wonderful opportunity, an excuse almost, to connect again with the Supreme Lord. 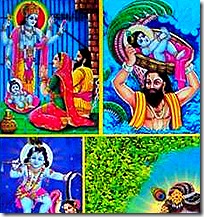 His lila is divyam, or Divine. If we read the same biography of a mortal person over and over, eventually the taste diminishes. “I’ve already read this. What more is needed to be learned?” The same limitation is absent with the endless glories and deeds of Bhagavan.

The person giving lectures at the weekly sadhu-sanga gathering rattles off verses verbatim, with translation and appropriate context. They not only have memorized the words, they know when a certain verse should be invoked. Rather impressive, considering I may not know many verses at all.

Again, forgetfulness gives a wonderful opportunity. Just go back and learn the verses again. Start slow and gradually build up. The shlokas in the Bhagavad-gita are mostly spoken by Krishna Himself. The Sanskrit is the original sound; it is not translated. The sound of God is the same as Him. Through memorization I am connecting with Him.

3. Learn to appreciate the service of others

There is some jealousy, no doubt. How is this person able to memorize so much? How can they sit in one place for upwards of four hours and produce an engaging and informative discourse from memory? What is their secret?

In devotional service the more one advances the more they appreciate the work of other devotees. Even if there is a hint of jealousy, it is used to appreciate instead of bring down. The more we honor the connection that others have with Krishna, the more we will advance ourselves. In this regard forgetfulness helps to bring humility, to remind us that we are not God, that we will never be, and that we do not have to be. He protects the surrendered souls, and looks only at their effort, not their ability or lack thereof.

Speaker verses from memory to recite.

Continuing for hours upwards of four,

Not ready to stop, could go even more.

By comparison nothing am I,

Forgetting despite best to try.

Even that auspicious can turn,

Chance for again sounds to learn.