“Hiranyakashipu could not kill his son by throwing him beneath the feet of big elephants, throwing him among huge, fearful snakes, employing destructive spells, hurling him from the top of a hill, conjuring up illusory tricks, administering poison, starving him, exposing him to severe cold, winds, fire and water, or throwing heavy stones to crush him. When Hiranyakashipu found that he could not in any way harm Prahlada, who was completely sinless, he was in great anxiety about what to do next.” (Shrimad Bhagavatam, 7.5.43-44)

The best of the atheists. This is how the son, Prahlada, once addressed the father, Hiranyakashipu. The Sanskrit word is asura, and it has several different English translations. At the root level, the word is a negation. Sura refers to a god or someone with godlike qualities. Honesty, compassion, a level-head, equality of vision – a sura is basically an all-around good guy.

The asura is someone possessing the inverse qualities. Dishonesty, intolerance, prejudice, lack of respect for innocent life – in essence doing whatever the senses want, at any time. The asura is a demon and also an atheist. Surely, they want their own property respected. They don’t want others to impose unnecessary violence, but they don’t afford others the same luxury.

Hiranyakashipu, a historical figure described in many Vedic texts, is the ideal antagonist and Prahlada the adored hero. Yet based on the end result, we can say that the father did his job. Though not his intention, the king helped to liberate his son from the cycle of birth and death. The occasion of Holi is a reminder of one of the ways the father carried out his responsibility to his dependent, though perhaps inadvertently.

1. Took a strong opinion of the name of Vishnu

Hiranyakashipu hated God so much that he couldn’t stand to hear any name that referenced Him. There was a vendetta, a score to settle. The supposed God, Lord Vishnu, had previously killed Hiranyakashipu’s brother Hiranyaksha. The king always remembered that, and so day and night he thought of Vishnu.

When devotion to Vishnu was seen in the son, the father could not tolerate it. He had to change things. Any person seeing this reaction would have to think that the name must be something unique. Otherwise, why would the father mind? There are so many names out there. A name is just a sound vibration, after all. Why would Hiranyakashipu care so much?

2. Strengthened the conviction in the child

Prahlada ended up practicing devotion under duress. Not by choice, but what other option was there? Prahlada was not about to abandon someone he knew to be the origin of all strength, found in every living thing. Prahlada was not about to chase after the illusion of fame and power, the life of sense gratification that he accurately referred to as “chewing the chewed.”

Hiranyakashipu tried to kill the son because of the devotion to Vishnu. The boy kept surviving the attempts. One of them involved being placed in a fire. The king’s sister took the boy into the pit, expecting to survive and Prahlada to be killed; except the reverse occurred. Holi gets its name from that sister, Holika, whose ashes were made up of different colors. 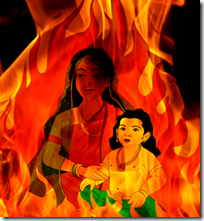 The perseverance seen in Prahlada only serves to strengthen conviction. To succeed in any task is not easy, as the three modes of nature must first cooperate. For Prahlada there was deadly force of the adhibhautika kind arriving from close by.

That devotion continued, though. The further one progresses on the path, the more assured they become of liberation, which is the end to the cycle of birth and death. The key indicator is consciousness, particularly at the time of death. One who has thought of Vishnu throughout life is more likely to remember Him at the important moment of quitting the body. Hiranyakashipu helped Prahlada to keep remembering Vishnu.

3. Brought Vishnu to the scene

What better way to get validation for your efforts than to see Vishnu directly in front of you, in a form no one has ever seen before? Hiranyakashipu made this happen. His antagonism was so great, his violence against the innocent child so intense, that God finally took an avatara and arrived in front of the king.

This was a half-man/half-lion, perfectly suited to kill the king, who had previously received many protections against death through the favor of Lord Brahma, the creator. Just one percent vulnerability is enough to qualify as mortal, and Hiranyakashipu learned this the hard way.

Afterwards, Prahlada was the only person around who wasn’t afraid of Narasimhadeva, who looked very angry. Prahlada did not want any boons, but was so kind and forgiving that he asked that perhaps the sinful father could be excused for his sins. Narasimhadeva replied that because the family had such a wonderful son like Prahlada, so many past generations would automatically attain liberation.

One truth revealed from the incident is that the power of Hari’s name is so strong that even an enemy of God can help to save the world. Through their strong antagonism, others can become further inspired, and in their subsequent practice they are defended by the person whose nails are so powerful that they can tear apart an otherwise invincible ruler.

With killing efforts not to tire,

One famous attempt into fire.

By the sister Holika taking,

Hoped for end of Prahlada making.

Except the reverse to take place,

Another danger to erase.