Home › conversations › Why Are There Asuras In The World

Why Are There Asuras In The World

“O my dear King, Hiranyakashipu was always drunk on strong-smelling wines and liquors, and therefore his coppery eyes were always rolling. Nonetheless, because he had powerfully executed great austerities in mystic yoga, although he was abominable, all but the three principal demigods—Lord Brahma, Lord Shiva and Lord Vishnu—personally worshiped him to please him by bringing him various presentations with their own hands.” (Shrimad Bhagavatam, 7.4.13)

Friend2: What’s your definition of asura?

Friend1: A bad guy. Someone lacking good qualities. Lying, cheating, stealing, intentionally causing distress to others, not respecting life and property, unless it is their own.

Friend1: Yes, I understand the root definition, if that’s what you are getting at. The asura is opposite of the sura. The Sanskrit word is a basic negation. The suras are the good guys. They believe in God. They may not be perfect, but they tend to be on the right side of things.

Friend2: Yes. The conflict between the suras and the asuras has been going on for thousands of years. That is the way of the material world.

Friend1: I get that. Since they worked together to churn the ocean of milk, where so many things were produced, including nectar, the conflict hasn’t subsided. The suras are favored by Lord Vishnu, the Supreme Personality of Godhead. Therefore even if they suffer defeat every now and then, if it looks like the asuras are gaining in strength and prominence, the situation won’t last for long. 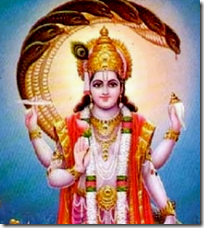 Friend2: Yeah. A smart person would realize that the side of the suras is the one to be on. Even if you’re lacking good qualities, from a sheer self-interest perspective Vishnu’s protection would override anything the asuras could offer.

Friend1: Maybe I’ve asked this question before, but it’s something that comes up from other people. Why are there asuras to begin with?

Friend2: What do you mean? Isn’t that like asking why there are trees, plants, rivers, mountains, and people in general?

Friend1: Not quite. The asuras cause so much trouble. They are synonymous with disturbance. The saintly qualities are conducive to good. Why don’t just the saintly people live here?

Friend2: For starters, there is a place where such conditions exist. It is known as the spiritual world. Vaikuntha is the place free of anxieties. You won’t find asuras there.

Friend1: Okay, but why do they exist at all, in any place? Why doesn’t Vishnu prevent them from taking birth?

Friend2: Let me ask you this. Have you ever lied?

Friend1: Of course. I am not George Washington [smiling].

Friend2: Have you ever taken something that didn’t belong to you?

Friend1: Ashamed to admit it, but yes.

Friend2: Have you ever caused injury to someone else, either physically or verbally?

Friend1: Alright, are you done with the rhetorical questions?

Friend2: I’m asking to show that there is good and bad within all of us. It is part of living in the material world. The event of birth indicates sin. Papa is the opposite of punya. The original sin, if you will, is choosing against the association of Vishnu.

Friend1: Okay, but you still have sura-like people being born. They may be a little bad, but ultimately they are good.

Friend2: And so the bad can be reformed, as well. Maybe not in the present lifetime, but in future ones.

Friend1: But Shri Krishna states in the Bhagavad-gita that the worst among men are repeatedly cast by Him into lower species.

Friend2: Sure. That is an appropriate punishment for horrible behavior. It doesn’t mean that things can’t turn around. Everyone is spirit soul, after all. They are God conscious deep down inside.

Friend1: Okay, and so the asura birth is allowing the bad qualities to manifest. It is like providing a playing field for sinful activity.

Friend2: Now you’re getting somewhere. The material world is a playing field. Good and bad or somewhere in the middle. You choose. By being good you gradually go back to the original consciousness. It’s not guaranteed, though. The leader of the suras, Indra, is known for having committed atrocities in the past. It is not like he is perfect.

Friend1: Such as with the Govardhana Puja incident. 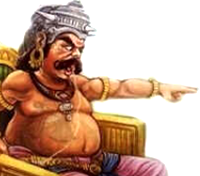 Friend2: Exactly. The goal should be to purify to the point of rising above distinctions like good and bad. Be purely good. Be on the transcendental platform. That is ultimately what Vishnu’s association is for. People like Hiranyakashipu learned the hard way. He was the worst character, but at the same time close by was a pure devotee, the son named Prahlada. You might say that the presence of the asuras is inauspicious, and it surely is. But this world has saints, too. You might find both in the same household, and it is up to you to choose which side to favor.

Asuras so much harm to do,

Lying, cheating and stealing too.

Why in this world at all,

Where temporary home to call?

Good and bad inside one of us each,

Possible with reform from pious to teach.

In some households both could even found,