Death Is Looking For You

“Indeed, Ravana is not agreeable to the idea of returning me. Ravana has come under the influence of time, who is seeking his death in battle.” (Sita Devi speaking to Hanuman, Valmiki Ramayana, Sundara Kand, 37.10)

Someone behaves so poorly for so long, it becomes bewildering after a while. Do they not know better? Do they not see the consequences lying ahead? Are they delusional? Do they think this path is sustainable, despite others having failed? The success rate is zero; that is to say no one lasts long choosing this route.

Throwing their hands up in the air, there is only one conclusion left. This person has a death wish. They are inviting death. They don’t want to wait for the uncertain future. Let the inevitable end of life take place right now.

Sita Devi reached a similar conclusion about the villain Ravana. She had actually observed this early on, soon after interacting with the ten-headed one, who was the leader of Lanka.

“When the time for the destruction of living entities arrives, people are seen to perform activities that endanger themselves due to the influence of that all-devouring time.” (Sita Devi speaking to Ravana, Valmiki Ramayana, Aranya Kand, 56.16)

She attributed Ravana’s grossly sinful behavior to all-devouring time, kala. She said that when the time of death arrives, people behave in ways to effect the final outcome. Ravana’s time had come, so he was creating an external cause to the end of life, which was actually due to kala all along.

In the above referenced verse from the Ramayana, Sita says basically the same thing. She is describing to Hanuman how the younger brother Vibhishana had tried, unsuccessfully, to set Ravana straight. The counselors and ministers were on the payroll, so to speak. They weren’t expected to give unsolicited advice that might anger the king.

The younger brother was different. They have a unique perspective. The relationship is closer, so there is less fear in speaking the truth. Vibhishana did so, but Ravana still did not listen. He was intent on keeping another man’s wife in his kingdom, against her will.

Ravana would pay dearly for this. He was already under the control of time, who sought his death on the battlefield. By refusing to return Sita to her husband Rama, with the idea not agreeable to him, Ravana was set to leave Rama with no other choice.

An entire army would march to Lanka to right the wrong. Ravana’s tremendous fighting prowess would not stand up against the volley of arrows released from Rama’s bow. Time paid the king a great honor. Time in the personal form arrived to facilitate the passage to another body.

That historical incident serves as a great reminder of the fleeting nature of life. Possessions, name, stature and fame will be crushed under the heavy wheels of time. Deeds do matter. Karma is real. Pious activities pay dividends in the future, and eventually the negative consequences to sinful life will emerge. 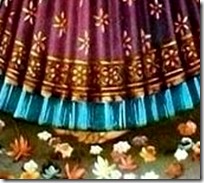 The devotees of God are protected all along. Their stay in the difficult material existence is made a little easier, and after death they return to the spiritual world. Those like Vibhishana become heroes and those like his brother become condemned.

Odd in this way to behave,

Such that no one can save.

So much into sin to fall,

Death soon for them seeking,

Close of reign drawing near.