Home › the four › Four Ways Krishna Would Manifest In Dvaraka

“When Krishna was residing in Dvaraka, some of the elderly members of the Yadu family would occasionally put some important matter before Him. At such a time, Krishna would carefully give attention to those matters. And if there were some humorous topics mentioned, Krishna would immediately respond with a smiling face. Sometimes when Krishna was executing His duties in the assembly known as Sudharma, He would ask the elderly members for good advice. By such activities He is manifest as the supreme spiritual master, the supreme executive head, the superior intelligence, the supreme power, protector and maintainer.” (The Nectar of Devotion, Ch 39)

The city of gates. Built within the water, taking advantage of the expert engineering ability of Vishvakarma, whose name means “work of the entire world.” The entire Yadu family coming along, ready for protection against the annoying and persistent attacks from foreign rivals, who had yet to emerge victorious.

The leader would be known as Dvarakadhisha. At the time He already had many other names, such as Krishna, Govinda, Hari, Murari, and Gopala. While living in that amazing city, through the work accomplished on a routine basis the one Supreme Lord would manifest in different ways.

He is already the adi-guru. This means the original teacher. Guru can also refer to a generally respected personality, like a mother, father or elder in the family. Even with this alternate definition the term still applies to Krishna. He is the adi everything; He is the origin. The many universes come into existence through His outgoing breath in the form of Vishnu, who is lying down, completing the most difficult work with ease. 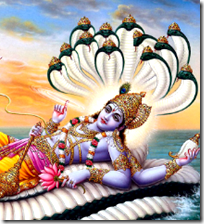 Krishna is the highest authority figure in Dvaraka, even though others may be senior to Him by age. Arjuna was slightly perplexed when hearing about the sun-god, Vivasvan. On the battlefield of Kurukshetra the king of Dvaraka explained to Arjuna that the timeless teachings forming what is known as the Bhagavad-gita were originally passed on at the beginning of the creation. The same Krishna was there acting as teacher. It was difficult to understand for Arjuna since the sun-god is senior by birth to practically everything and everyone.

“Arjuna said: The sun-god Vivasvan is senior by birth to You. How am I to understand that in the beginning You instructed this science to him?” (Bhagavad-gita, 4.4)

The explanation is that Krishna does not change His transcendental bodily-identity. He maintains the same external identity throughout the time continuum, while the individual souls are known to travel from body to body in pockets of time known as lifetimes.

The final word on all matters. Not acting hastily. Not ruling with an iron fist, where everyone lives in fear of Him. Not scaring others into submission. Still, Krishna is the top executive in Dvaraka. What He says goes. He is the most benevolent leader, as everyone is pleased in their interactions with Him, though they may occur in different capacities.

The executive head and spiritual master do not act whimsically. They are not driven by their senses; the contrary behavior is known to be a sign of weakness. Krishna explains that lust is the all-devouring enemy of this world. Those consumed by lust quickly fall into madness due to unsatisfied desires. Anger is due precisely to this, and from anger a person is capable of doing anything, even if the behavior is widely acknowledged to be fruitless.

Krishna is free of kama, or lust. He always maintains a level head, and the supreme intelligence accompanies. He is smarter than everyone and so He can provide the best advice. Who better to turn to in times of trouble than the person who has seen it all? He knows beginning, middle and end.

4. The supreme power, protector and maintainer

He is the commander of the military force, but it is not like He lacks might Himself. The protection of every person is left to Him. There are bad people in this world. Escaping the harsh realities through watching television for hours and hours does not change the fact. Aggressors are always around ready to inflict harm on the innocent.

Dvarakadhisha is there for His many queens, for His children, for the citizens, for the elders in the family, and for dharma itself. He is the most powerful, and He protects and maintains at the same time. This visible display in Dvaraka gives an idea of the same accomplished by Krishna applying for the entire universe. 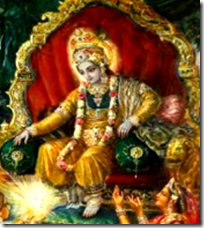 Though there are deputies, commonly referred to as the three guna avataras, the guiding power in the background is the same Krishna. If not for His potency, Brahma could not create and Shiva could not destroy.

Many roles by person the same,

When everyone to Dvaraka came.

Supreme power protection to give,

With advice of seniors to live.

With benevolence ruling over,

To know how Krishna all to command.