How Do You Explain Walking Around The Tree To Someone New

“Even a leaf, a flower, a bit of fruit, or a little water, which are all available in every part of the world, can be offered by any person, regardless of social position, and will be accepted if offered with love. There are many instances in history. Simply by tasting the tulasi leaves offered to the lotus feet of the Lord, great sages like Sanatkumara became great devotees. Therefore the devotional process is very nice, and it can be executed in a happy mood. God accepts only the love with which things are offered to Him.” (Shrila Prabhupada, Bhagavad-gita, 9.2 Purport)

Friend1: You know I love to bring in the perspective of the outsider.

Friend2: Outsider to what?

Friend2: The concept, the theory, or devotional practices themselves?

Friend1: The lifestyle. Try to see from the angle of vision of the person who has never set foot inside a Vishnu-related temple before.

Friend2: Do they know anything about Vedic culture?

Friend1: From the periphery, and what they understand falls into the category of Hinduism. I must say, even to children growing up in such a culture a lot of the imagery doesn’t make sense.

Friend2: It’s beautiful, but a lot to take in. Speculation won’t do much for you.

Friend1: And so it is easy to lose this perspective once you become immersed in the bhakti way of life.

Friend1: Or talk, even. Anyway, so one thing I’m sure newcomers might find a little strange is the walking around the tree.

Friend2: There is a tree implanted inside the temple? That is news to me. If that is the case, you should inform the media. On the nightly telecast they can show how devotees of Vishnu have managed to subvert nature and keep a large tree indoors.

Friend1: You know what I am referring to. Tulasi Devi. 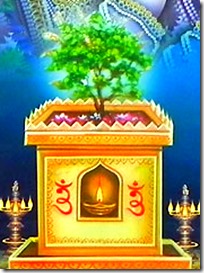 Friend2: Oh, and the worship involving circumambulation? She is more a plant in that sense, which people are known to keep inside of homes.

Friend1: Whatever the label, we do see people place a few drops of water, walk around in a circle and sing songs. How to explain what is going on?

Friend2: You think people would find this more strange than say gazing upon an opulently adorned statue at the front of the room?

Friend1: Yes, because statues are everywhere. They make life-size ones of basketball players. There is a humongous one of a former president sitting down. That kind of idolatry is not out of the ordinary. And yes, I understand that the deity in the temple is not an idol. It is the archa-vigraha, the worshipable form of the Almighty. Yet another sign of His causeless mercy by appearing in supposedly material elements. 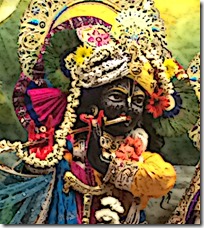 Friend2: In order to help us understand Him. We don’t know what nirguna really means, so God shows us something that is apparently saguna, or with distinguishable qualities.

Friend1: I know Tulasi Devi is the goddess of devotion. You worship her, who appears in the form of the plant, and you receive blessings in your bhakti endeavors.

Friend2: This is very important to understand. The spiritual abode of the original Personality of Godhead, the highest planet in even the imperishable universe, is known as Vrindavana. The root meaning is “a forest area where the goddess of devotion is found in abundance.” Vrinda Devi is another form of Tulasi. Shri Krishna lives in a place where devotion and the goddess representing her are everywhere.

Friend1: Okay, but what is worshiping a tree going to do? You understand what I am saying? Isn’t there an element of faith involved?

Friend2: Of course. No doubt about it. Doesn’t make sense to hold the cow in such high esteem, either, but just see what results when she is protected. She provides so much value to human society. A single animal doing so much, both while living and after. The same is true of Tulasi Devi. There are stories of people becoming great saints just by tasting tulasi leaves previously offered at the lotus feet of the Supreme Lord. The celebrated saint who composed the Ramacharitamanasa earned the favor of the goddess and received a name that marked his devotion to her.

Friend2: You can attempt to give the extended explanation, delving deep into the philosophy, but the mercy of God is such that any person can make advancement without extraordinary effort. Worshiping Tulasi Devi is one way.

What about tulasi for others to say?

That so much coming from tree,

Devotion’s goddess is she.

Faith not required some,

That so easily benefits to come?

Like Loading...
‹ Four Reasons Hanuman Is Known As Lakshmivan
Why Would Krishna Need To Live In Dvaraka ›