Home › conversations › Why Would Krishna Need To Live In Dvaraka

Why Would Krishna Need To Live In Dvaraka

Friend1: Alright, so we know He had no problem taking care of Kamsa’s henchmen.

Friend1: Yes, the Supreme Personality of Godhead. Bhagavan, the personal side to the Divine, the detail behind the abstract. The one who descended to earth, appearing in Devaki’s womb and then spending the childhood years in Gokula.

Friend2: Why were there henchmen, as you call them? And how many?

Friend1: Numerous. These were bad characters, but with special abilities.

Friend1: They could mask their shapes at will. Known as the kama-rupa siddhi in Sanskrit, it is something like magic, but there is an actual physical change, not just the illusion of one.

Friend2: I hope you realize that if anyone were to exhibit such an ability today, they would be considered Divine.

Friend1: Oh, no doubt. Just see how quickly Vedic literature squashes bogus ideas. From reading a few pastimes of Shri Krishna we learn that even being able to morph the body into different visible manifestations is not something special.

Friend2: Beyond that, it doesn’t make you a good person, necessarily. These were bad guys, after all.

Friend1: Kamsa wanted Krishna dead. At any cost, get the job done. These were powerful helpers, sent to Gokula on a mission.

Friend2: To attack an infant, no less.

Friend1: They failed every time. I don’t have the exact count offhand, but there were more than a few.

Friend1: The serpent who looked like a cave. The whirlwind. The witch who took the shape of a beautiful nurse. The giant crane.

Friend1: My question today is about the city of Dvaraka and how it came to be.

Friend2: The spiritual land built within the water. The city of gates. Krishna lived there as Dvarakadhisha, the illustrious king with His many thousands of queens. The same Supreme Lord but in a different setting, with moods of interaction not found in Gokula.

Friend1: I get that, but I’m talking about what led to the city’s formation. We know that Krishna and His brother Balarama fled from the fight against Jarasandha.

Friend2: Jumping off a mountain, where the fiend thought that the brothers were burned to death.

Friend1: I know that Jarasandha had attacked Mathura many times previously. He lost every time. No shame. No embarrassment. The bad character would not relent.

Friend2: That is emblematic of the asura mentality. They resist the will of the Divine, despite the overwhelming evidence in front of them of both His existence and His supremacy.

Friend1: Okay, but why retreat to a city in the water? Why did Krishna have Vishvakarma, the engineer of the gods, construct the city of gates? Why not just kill Jarasandha Himself?

Friend2: Well, it is an interesting study. Krishna earned the name Ranchor by fleeing the battlefield. What is typically a demerit, a knock against a person, is celebrated in the Supreme Lord. There are famous temples dedicated to this pastime.

Friend1: The purpose was to show that the dualities of right and wrong do not apply to Him, since He is the embodiment of dharma?

Friend2: Both the embodiment and the objective. Let me ask you this. Do you think Krishna was not capable of defeating Jarasandha?

Friend1: Of course He was. Ample evidence is there in the Gokula pastimes. The only reason I’m asking is because I know that He would not have had any problem killing Jarasandha.

Friend2: Enemies are all around. They become a nuisance after a while. Why not take some time off? Relax a bit. Stay safe from these annoying people, who are like flies in the grand scheme of things. Put up a mosquito net and be done with it.

Friend1: Doesn’t it show weakness, though?

Friend2: Only if fleeing was the final result. Shri Rama lost His wife Sita Devi to the trickery of Ravana, the king of Lanka. Does this mean that Rama was deficient in any way?

Friend1: But He returned the favor. He attacked Lanka and defeated Ravana in battle. Krishna never killed Jarasandha.

Friend2: He helped Bhima accomplish the same, though. There was expert advice given during the wrestling match between the two. Just as Krishna helped Arjuna win the Bharata War, He helped Bhima tear Jarasandha in half, which was the only way to kill him.

Friend1: The purpose of Dvaraka was to glorify Bhima, the son of the wind? 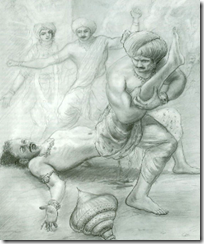 Friend2: Multiple purposes fulfilled simultaneously. There were so many wonderful pastimes in Dvaraka, and some valuable lessons taught even amidst the more negative incidents, such as the Syamantaka Jewel. The Supreme Lord instructs through His actions, and the wise know how to extract the proper meaning.

At next Jarasandha attack seeing,

The city in the water to build,

With help of Vishvakarma skilled.

Celebrated that pastime when,

But why not deal with it then?

To Bhima the glory of victory going,

Like Loading...
‹ How Do You Explain Walking Around The Tree To Someone New
Even The Impersonalists Are Attracted ›