“It is said that it is possible for a stronger party to live if they develop enmity with a weaker party. Therefore a weaker man desiring self-preservation should not develop enmity with one who is stronger.” (Hanuman speaking to Angada, Valmiki Ramayana, Kishkindha Kand, 54.12)

The rising of the sun in the morning is to be celebrated. Not for the renewed opportunity at sense gratification, of pushing the body to the limit, breaking your back, just for experiencing a taste which is something like chewing the chewed.

“Prahlada Maharaja replied: Because of their uncontrolled senses, persons too addicted to materialistic life make progress toward hellish conditions and repeatedly chew that which has already been chewed. Their inclinations toward Krishna are never aroused, either by the instructions of others, by their own efforts, or by a combination of both.” (Shrimad Bhagavatam, 7.5.30)

The next day is an opportunity to again glorify the Supreme Personality of Godhead and His associates. Of what other purpose is there to the hands which type, the melodies in composition, and the mouth to sing and speak? Goswami Tulsidas compares the mouth of a person who never speaks the glories of Hari to a snake-hole.

“The tongue is like a snake and the mouth like a snake hole for the person who does not chant the holy names of the Lord. Those who have no love for Shri Rama are understood to be bereft of the creator’s favor, says Tulsi.” (Dohavali, 40) 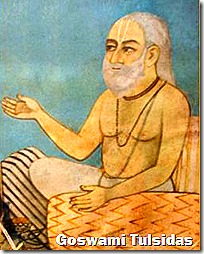 As a dedicated servant of the Supreme Lord in the incarnation of Shri Rama, Shri Hanuman is an ocean of virtues and good qualities. He is sushila, or gentlemanly in behavior, but also mad as an elephant when the time is proper for defeating enemies to dharma and the righteous way of life.

Known for having crossed the ocean in a single leap and carrying a mountain to rejuvenate a wounded warrior, Hanuman also has strength in determination and perseverance. He is able to endure through situations that to the average person seem like the worst kind of torture.

1. Listening to his friends wanting to give up

Though staying on this earth for thousands of years, Hanuman is best known through incidents documented in Vedic literature, such as the Ramayana, Mahabharata and Puranas. The Ramayana is the primary source of knowledge, and despite being a lengthy work focusing on the main character of Rama, there is an entire book within dedicated to Hanuman’s brave journey. That book is aptly labeled sundara, which means “beautiful.”

The journey is the culmination of a long, extended mission assigned by Sugriva, the leader of the Vanaras in Kishkindha. The task is to find Sita Devi, who has gone missing. She is Rama’s wife, and Sugriva is now in an alliance with Rama.

The Vanaras, who are monkey-like beings, in large numbers disperse. Hanuman is with one group, and his presence gives the leaders an idea that his group will achieve success, if it should come at all.

After much time passes, there is a problem. The leader of this group, Angada, wants to give up. He doesn’t see any value in returning to Sugriva and reporting failure. He doesn’t see success on the horizon. Hanuman has to endure this insult to Shri Rama. He has to accept the decision, though he strongly disagrees with it. He tries his best to get the leader to change course, employing the strategy of diplomacy known as bheda, which is sowing dissension.

2. Fighting hostile enemies all by yourself

Imagine entering a territory where everyone is hostile toward you. Something like escaping from prison, but in the reverse. Here the people are generally bad in character, as they are Rakshasas, which are like man-eating ogres. Hanuman is the embodiment of good, working for the great purifier, pavitram, Rama. The two don’t mix, so if anyone were to spot Hanuman in Lanka there would be trouble.

Yet he wasn’t afraid. Even if I have expert ability in fighting, I can always be attacked from behind. You can’t fight someone you can’t see. Enough people gang up against me and I won’t be able to properly defend myself.

Hanuman faced something like this and more. There was no fear. He could have escaped from the city unscathed, but he wanted to give the enemies a little taste of what was to come their way upon Rama’s arrival. The son of the wind was fearless because he knew that the cause was right.

Angada’s party ended up moving forward. They were not forced to give up. Was it good fortune? Was it samyoga, something like serendipity? News of Sita’s location came to the group, but just as they were excited to continue, they came upon another obstacle. This was physical in nature. A large ocean, how would they get across?

His memory then jogged by Jambavan, Hanuman expanded his size and cleared the great length with a single leap, a feat for which he is glorified to this day. After searching the city of Lanka undetected, he finally met Sita. He was pleased by the successful end, but also greatly distressed at witnessing her suffering.

Imagine if someone you cared so deeply about ended up in a painful situation through no fault of their own. Would you not get angry? Would you not lose faith in mankind’s ability to be fair and decent? Would you not wonder if the bad guys do really end up winning?

Hanuman endured this distressing vision and continued forward. He did not let the visuals get in the way of the mission of pleasing the Supreme Lord. He respected the opulence and strength concentrated in Lanka, but he was not intimidated by the situation.

4. Staying on earth while everyone dear to him left

The story ended well. Sita reunited with Rama. The good guys won and the bad guys received the deserved punishment. Hanuman’s effort was so much appreciated that he returned to Ayodhya with a triumphant Rama, who then became king.

The Supreme Lord appears and disappears. This is with respect to the personal manifestations only, as the wise understand that God is always around. He is with me in the heart at the moment, and no matter where I go He will stay with me; such is His amazing kindness.

The incarnation is described as avatara, which means “one who descends.” The Rama avatara eventually went back up, to the spiritual world. He took His close associates with Him, but Hanuman stayed behind. The servant who deserved anything he could ask for opted to remain on earth for as long as Rama’s glories continue to be told. This is a blessing for the individual who speaks those glories, as it gives justification for Hanuman to visit.

5. Destroying your own Ramayana

Hearing the glories of Rama and family gives so much pleasure to Hanuman. What better way to remember than writing? Memorialize the events. Take advantage of the eyewitness testimony you can offer. Glorify in a way that speaks from the heart.

After having undertaken such an effort, imagine then destroying your work. On purpose, intentionally, with a level-head. This isn’t the result of a drunken rage or a fit of anger due to an unmet desire.

Rather, Shri Hanuman destroyed his own Ramayana after seeing the despondency caused in the great sage Valmiki. He thought that Hanuman’s telling of the events defeated his own. Hanuman would rather let another devotee thrive than have any role in making them feel inferior.

A great sculptor destroying their cherished piece because it made someone else feel less capable. A notable figure refusing an honor because another worthy person was passed over. Something to never be retrieved, except for the smallest pieces by the poet Kalidasa, Hanuman’s Ramayana is remembered only by the author.

Of difficulty only you can understand,

Since lengthy work of your own hand.

Imagine then destroying in an instant,

When another feeling ability distant.

That inferior, not even to compare,

Enduring this and other situations so,

Wherever Rama’s glories there to go.

Like Loading...
‹ Four Questions The Mature Human Being Should Ask
Three Amazing Things Moms Are Known To Do ›