Home › the three › Three Amazing Things Moms Are Known To Do

Three Amazing Things Moms Are Known To Do

The child is crying in the middle of the night. It won’t go to sleep. The labor was intense enough. What man could survive painful contractions, five to ten minutes apart, straight through for twenty-four hours or more? The experience creates a bond like no other between mother and child.

The mother to the newborn can do amazing things. Change diapers, feed at odd hours, go without sleep, and still maintain the household. They have super-strengths, which are on loan from above. Though the Sanskrit word purusha has one meaning of male, it can also refer to the individual person in general. Their strength, paurusham, comes from a higher source.

Because of their dedication and sacrifice, the parents are known as the first gurus. These are respected personalities who are also able to teach. Taking a few examples from history documented in Vedic literature we get a glimpse of the amazing things mothers are capable of.

1. Chant the names of Vishnu

Escaping the cycle of birth and death. That is the ultimate destination, and the starting point is inquiry into spiritual matters. Known as brahma-jijnasa, only the human being has this ability. The same animating spark, the particle of spirit, the purusha, can live in different kinds of bodies, which are identified as species.

The human birth should be sujata, auspicious in nature. Yet in the beginning the ability for inquiry into spiritual matters is not there. The child can barely say a word or two, so how will they be able to ask questions on higher topics?

This does not mean that progress cannot be made towards reaching the ultimate destination. The sound of the Almighty is as good as His association. One reason that the bhakti path is supreme is because it lacks limitations. While jnana and vairagya, who are like two sons to Bhakti Devi, the goddess of devotion, can be acquired only after maturation, bhakti is available at all times. Brahma-jijnasa is important, but upasana is paramount. This is coming closer to God the person. 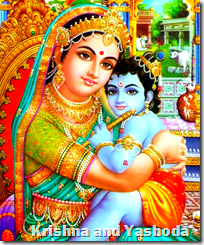 One simple way to bring the child closer to God is to chant His names. Mother Yashoda did this one time for her darling child named Krishna. She recited different names of Vishnu, who is the personal side of the Divine, for protecting her son. The amazing thing is that Krishna is Vishnu Himself. The mother was not aware, but her behavior was exemplary. She knew towards which direction to turn for the ultimate benefit for her dependents.

2. Check the mouth for dirt

A group of parents discuss which stage of childhood is the most difficult to deal with. One person says the first three weeks, since the child needs to eat all the time. This makes sleeping through the night very difficult.

Another parent says the most difficult time is when the child begins to crawl and walk. They require constant supervision, because they will put anything into their mouth. The guardians cannot allow this, for obvious reasons. 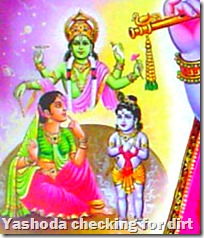 Mother Yashoda one time checked Krishna’s mouth for dirt. This was following an accusation made by Krishna’s friends. The reward for this motherly supervision was a vision of the entire universe. She saw something amazing inside the mouth of her son, who then quickly took back the vision, so as to not confuse the mother into His true nature.

3. Give an idea of where to find God

Can any instruction be more important than this? Teaching me to walk, talk, and read helps tremendously, but if sense gratification is the end-goal, then the life closely resembles previous experiences, of which I don’t remember. These were in other kinds of species, where satisfying the senses is the only interest.

If my mother can show me the way towards transcendence, then the debt is impossible to repay. She may tell me that the Ramayana is the most important book to read, that if I want to really know about duty, devotion, honor, piety, the meaning to life, and the way to persevere through the many challenges, the person to understand is Shri Hanuman. My mom tells me to consult the writings and songs of Goswami Tulsidas.

Afterwards, the bliss I feel is incomparable, and I become forever indebted to the person who showed me the way. Though I may not be able to understand the language precisely, my mother helps me again. She understands the verses in their original form, as the language spoken in her family for many generations is quite similar. Her ability to translate for me is something like giving functioning eyes to a blind man. Even that is not an accurate comparison since ordinary vision is defeated in importance by direct association with a saintly figure.

The mother can give hints in an indirect way, also. Dhruva Maharaja was a young child and he was set on revenge. He wanted to get even with his step-mother, who had insulted him. Suniti, the birth-mother, advised Dhruva on where to go for resolution. Vishnu was the person to approach, even if there were material desires. His association is purifying, as He would prove in the later meeting with Dhruva.

Since material desires to lose.

Association itself to purify,

In surrender solely on Him to rely.

Mother in this way idea can give,

Wisdom of ages with immeasurable size,