Home › conversations › Should Someone Feel Guilty About A Supposed High Birth

Should Someone Feel Guilty About A Supposed High Birth

“By remembering Shri Rama’s holy name, even those who are born into a low caste become worthy of fame, just as the wild trees that line the streets in the heavenly realm are famous throughout the three worlds.” (Dohavali, 16)

Friend1: I know that we have discussions on how someone of low birth can rise to the status of liberated devotee.

Friend2: It’s just a circumstance, if you think about it. Maybe that person will never be accepted into circles that base their judgment off birth alone, but outside opinion is of no issue. We’re talking about the Supreme Personality of Godhead, here.

Friend1: He is the ultimate arbiter.

Friend2: He can override whatever happens on judgment day, so to speak. Look at the case of Ajamila. The messengers of Yamaraja, the god of justice, arrived to take him away at the time of death. They were intercepted by the messengers of Vishnu, who is the personal side to God.

Friend1: Because Ajamila had uttered the name of Narayana at the time of death. Therefore, he was immune to sinful reaction. There was nothing to judge; Vishnu considered him a devotee.

Friend2: Think of the many past sinful deeds. Poor guy was immersed in papa, though he was originally a brahmana.

Friend1: That is an instance of high birth, followed by a descent into the life of someone of typically low birth, with a conclusion of redemption.

Friend2: Salvation. Liberation. Whatever you want to call it, the fall was only temporary. Thus even if you don’t respect someone of a low birth, kujati, know that they can rise to the top. Goswami Tulsidas compares them to the insignificant trees lining the roads in the heavenly realm. 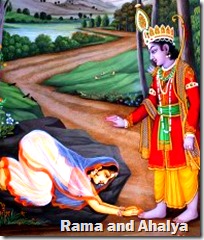 Friend1: That is interesting.

Friend2: On the morning commute to work, how many trees do we pass on the road?

Friend1: Too many to count.

Friend2: They aren’t even noticed. Yet even the weakest looking trees in the heavenly realm are honored. They are suratarus; they can grant desires. The person who is supposedly of low birth receives a similar elevation. They become highly honored. The reason is association. It matters not from where you came, but to where you are going.

Friend1: Alright, so no argument from me on that point. The principle is clearly understood.

Friend2: Just one further reminder. Think of how prasadam works. This is ordinary food, but because of the association in offering to Vishnu, it becomes sacred. You enjoy bhoga, but you honor prasadam. If food and tracts of land can become sacred due to connection with God the person, then the same is true of people who are connected.

Friend1: Let’s take the opposite condition. We have someone of high birth. Their parents are devotees. The ancestors set up traditions where someone like Shri Hanuman is held in the highest esteem.

Friend2: The dedicated servant to Vishnu’s incarnation of Shri Rama.

Friend1: It is almost like Hanuman watches over the family. The children develop a natural affinity to him because of the songs and stories shared by the parents.

Friend2: That is certainly an auspicious birth.

Friend1: Yes, and so those people are fortunate. They are on the right path. Will they not feel some guilt, though? When interacting with others who are not as fortunate, how to handle the situation?

Friend2: Why is there a “situation”? You can’t treat people with respect? You can’t deal with every person the same, regardless of their birth?

Friend1: I’m not talking ordinary, informal dealings here. What about with friends? You tell your stories about how great childhood was, how awesome a mom you have since she always quoted Goswami Tulsidas. Then your friend doesn’t have similar stories to share. Will they not feel inferior? Is that not putting someone else down for no reason? You see how guilt can arise here?

Friend2: I mean that is one way to look at it. Another viewpoint says that the other friend is just as fortunate. They are connected to the parampara. Perhaps they don’t have similar stories from childhood, but they can start their own disciplic succession.

Friend1: Because they are friends with the devotee.

Friend2: Yes. It’s not like things suddenly stop once you have an auspicious birth. It is not a final destination. There is some responsibility. Share the wisdom of the Vedas with others. Make sure that the tradition continues in the future. Remember that there was activity from past lives which had an influence. No reason to feel guilty, since you probably had so much punya accumulated from work in previous births.

Friend2: That accumulate sukriti, or good fortune. Use that to benefit others. Then they will become auspicious and help others. Whatever the circumstances of birth, know that connecting with God in consciousness is the best way forward. Stay connected to Him through chanting the holy names: Hare Krishna Hare Krishna, Krishna Krishna, Hare Hare, Hare Rama Hare Rama, Rama Rama, Hare Hare.

Since childhood towards deities to kneel,

Person of high birth not guilty to feel?

Since friends maybe with same tendency not,

How you then this auspiciousness got?

From good karma and deeds of past,

Now help others in finding the path.

For their own parampara to start,

Wisdom to generations to impart.