Home › thinking › The Dream Is My Reality

The Dream Is My Reality

“The material body has no factual existence in relation to the eternal soul. It is something like a dream. In a dream we may think of flying in the sky, or sitting on a chariot as a king, but when we wake up we can see that we are neither in the sky nor seated on the chariot. The Vedic wisdom encourages self-realization on the basis of the nonexistence of the material body. Therefore, in either case, whether one believes in the existence of the soul, or one does not believe in the existence of the soul, there is no cause for lamentation for loss of the body.” (Shrila Prabhupada, Bhagavad-gita, 2.28 Purport)

“Boy what a terrible night. Difficulty sleeping, to say the least. Eating too much. Stress during the day from work. Thinking that getting rest at the end would be easy and without issue was flawed. Not only did I toss and turn, but I had the worst nightmares.

“Unthinkable violence. Tremendous anger. Rage. This involved family members. I don’t engage in violence; I can’t remember ever being in a real fight. Yet in this dream I was pummeling away at someone in the family because of something they did. The intensity was off the charts; more than I’ve ever experienced while being awake.

”Needless to say, I am glad to be awake now. Let not that dream repeat ever again. Maybe I need to lower my blood pressure. Reduce my salt intake. Remove stress. Something needs to be done.”

Nightmares are not out of the ordinary. Though nothing from it is real, the experience is. The emotional effect is lasting. The ups and downs, the thoughts, the fears, the hopes – those cannot be said to be fake or without impact.

It is something like watching a film or television show. There is acknowledgment at the outset that this is a scripted performance. Going in I understand that there is a difference between live camera footage of real life and an edited and recorded presentation involving paid actors.

Yet it is seen that viewers get upset over the outcome. They like certain characters and despise others. Some may shed intense tears after the conclusion. The depiction hits home in some way, and the people watching intentionally forget the fictional nature of the content.

The Vedas compare the entire experience of birth and death spanning many lifetimes to such a drama. The experience is real, but the objects within it aren’t really. The reason is that nothing lasts forever. I am safely inside of my apartment at the moment, taking for granted that the heat and hot water work, that there is protection from the elements.

Everything now is steady, including the job, but there is always change. There is no guarantee that I will get to stay in this situation forever. One day the children will grow up and move out. My spouse and I will age and likely require more assistance in managing the household. Perhaps major surgery is on the horizon to prolong the use of the body.

The future of destruction is guaranteed, however. When it occurs, the past seems like a dream. There are no remnants to prove that the experience happened, but the memory is there. The living being goes through the same cycle, in many species, perhaps, spanning thousands of years.

The lone reality is the spirit soul, the living spark, and the accompanying source of the spiritual energy. These two eternals are always in existence; never to be killed or given birth to.

The superior eternal, known as Paramatma, uses one of His energies to create this dreamlike existence. The subordinate eternals then descend from a higher realm to take part in the drama. Liberation is merely remembering the original nature, of awaking from the dream, while conditioned life is continuing to stay asleep. 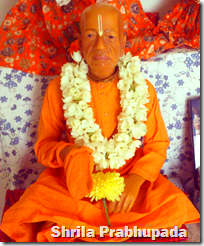 The chief eternal sends His representatives to the temporary and miserable world to change the state, from dreaming to alert consciousness. Realize the dreamlike nature of everything experienced and know that there is a reality. After all, though the events of a dream aren’t real, there is a reflection based on reality. In other words, I can only dream of driving a car if the experience of driving actually exists in real life.

In the same way, the dream of life in reincarnation is a reflection of something that exists in another realm. Known as the spiritual world, living there can actually be permanent. The representative thus not only wakes a person up, they show them the way back to the imperishable realm. 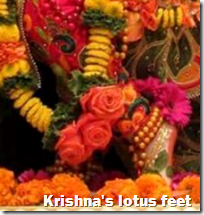 Upon reaching that destination a person never has to return.

Last night worst dream I had,

At family fumed and raging mad.

But truth of situation sad.

That entire existence so,

But of reality can know.

When guru for rescue purpose arriving,

Like Loading...
‹ Does Krishna Consciousness Have A Lot Of Associated Difficulties
Why Would A Devotee’s Ancestors Get Liberated Too ›