The Supreme Personality of Godhead gave the assurance. The loka-palas, the guardians of the planets, approached Him when they had no other recourse. Hiranyakashipu instilled fear throughout the world, from the pious to the impious. The good people had not done anything wrong, but they were needlessly put into a precarious condition due to the unlimited greed of a particular person.

The Sanskrit description is mahatmanah. In the future Hiranyakashipu would have a son of saintly qualities. The people who were worried enough to approach Bhagavan would have someone on their side appear in the king’s very home.

That spy behind enemy lines would help to fix the situation, but not in an anticipated way. Despite having so much Hiranyakashipu would lose it all. The cause would be bringing harm, becoming an enemy against someone who never created enmity with anyone. Whatever Hiranyakashipu had previously acquired through austerity would not be able to protect him.

Upon learning that the earthly realm is known as mrityu-loka, or the planet of death, a person might reassess desires in this area. That is to say if I know that I must quit this temporary body at some point in the future, what good is longevity going to do? A tree can stand in the same place for thousands of years and no one would consider it to be a superior being on the basis of that ability.

A long duration of life is one of the byproducts from the boons granted to Hiranyakashipu by Lord Brahma, the creator. If you receive immunity from death in so many situations, the natural expectation is that you will live for a long time. This is considered an opulence since the passing away of a young person is generally viewed as a tragedy, the missed opportunity to fulfill boundless potential.

Hiranyakashipu didn’t want to be safe from death just so that he could live in a remote area, like a cave or forest. He wanted to take full advantage by becoming king of the world. He rose so high that he overtook Indra, the king of heaven. The meaning is that the power of authority extended beyond the earthly realm. Hiranyakashipu went to places which can otherwise only be achieved through pious credits redeemed at the expiry of time spent in a human form.

As king of the universe practically, Hiranyakashipu had tremendous opulence. He had plenty of enjoyment available for the senses. This is considered a favorable condition, since the opposite tends to evoke sympathy. Governments around the world have been trying to tackle the poverty problem for decades, where even in places where a person has multiple automobiles and televisions, a properly heated residence and plenty of food to eat they are still considered poor.

If opulence weren’t enough to capture the attention of others, beauty is there to solidify the high stature. Again, this is considered a benediction, a reward for pious credits, punya, accumulated at some point in the past.

A person typically has little control in this area, otherwise. Unless you are born with beauty, it is difficult to change the situation. Modern-day surgeries tend to make the face look fake and artificially altered. Proper diet and experience can help to reduce the blemishes and unwanted fat, but the best source is heredity.

Have a piece of paper that says you successfully completed a four-year institution of higher learning? Possess yet another certificate that verifies completion at an even higher place of education? The understanding is that a person who is formally educated has more knowledge and intelligence than someone who does not. Despite the fact that so many successful entrepreneurs either never attended college or failed to finish when they did, formal education is generally considered an important factor in assessing stature.

From the Vedas we learn that real education starts with the spirit-body dichotomy. Prakriti is the understanding of nature, and purusha is the identification of a separate force providing the spark of life. Further education within this subject brings acknowledgement and appreciation for the origin of both the material and spiritual energies.

5. Whatever else one may possess

Hiranyakashipu lacked this appreciation. He did not extend the vision beyond the externals, i.e. what was in front of him. He did not consider the undefeated record of time. Therefore, whatever else he possessed in addition to the previously mentioned benedictions could not protect him from the consequences of a grave mistake.

The Sanskrit term is Vaishnava-aparadha. This is offending a person who is devoted to the personal God, Lord Vishnu. Notice that the direct offense is not as costly. If you are envious of God, if you deny His existence, if you consider Him a rival, that doesn’t really make you different from others living in the material world. In fact, the entire place, which represents a kind of illusion, a dreamlike condition from which a person is free to awake at any time, is created precisely for such individuals, to facilitate further indulgence of the rival spirit. 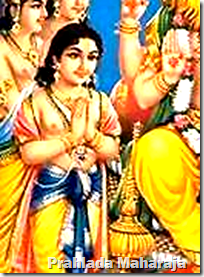 Hiranyakashipu’s son Prahlada would be a Vaishnava and it was direct offense against such a saintly person that would lead to the king’s demise. Whatever boons Brahma offered previously would not provide sufficient protection. This is because just one percent mortality is enough for the Supreme Lord to strike, who is so surgical in His attacks that He can outsmart whatever cone of safety an envious person may try to construct.

From Brahma’s benedictions to own.

That somehow from everything gave,

Opulence and education to save.

But offense committing just one,

Against most saintly son.

The reign of power to undo,

Categories: the five, the story of prahlada