Seven Entities To Not Be Envious Of

The Sanskrit word is vidveshah. Quarrel. Hatred. Envy. The warning comes directly from the Supreme Personality of Godhead. Vidveshah towards certain people and things ultimately leads to doom. Not merely a way to instill fear without reason, there is sound logic behind the concept of showing respect to those who do so much for mankind at large.

Known as devas in Sanskrit, they are the intelligence behind what otherwise gets attributed to randomness. As an example, the seasons are predictable. In the Northeastern portion of the United States, the months of January and February typically see below freezing temperatures. These occur on a regular basis. Accompanied by snow and ice, the season as a whole is known as winter. 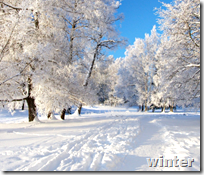 Yet even within that predictable period of time there is uncertainty. One day it could be warm enough to play outside, and the next a giant blizzard arrives. The weather forecasters can predict with accuracy a few days out, but no one knows for certain ahead of time.

This is the work of nature, which is known as prakriti in Sanskrit. That nature has no intelligence of its own. It’s something like asking a rock to move or talk. There first has to be the application of an external force.

The devas are that force with respect to nature. They run different departments of the material creation, including the gross elements: earth, water, air, fire and ether. In every religious tradition there is some recommendation for showing respect to the sun and other aspects of nature vital to sustaining life.

The Supreme Lord warns against holding envy towards the devas. The juxtaposition is with Hiranyakashipu, who at the time of the instruction offered by Bhagavan had essentially placed all of the devas in the universe under his control.

Though they might be considered inferior beings, and under the control of the human population, the cows are very important. They are mothers, after all, and they provide vital ingredients to the human society. The service on the other side is minimal. A little grass to eat, a warm enclosure to keep safe from the elements, and overall protection against unnecessary violence.

A person may think that envy of the cows won’t carry any harmful effects. After all, in many places in the modern day cows are routinely rounded up and mercilessly slaughtered. Where is the visible phala of karma, the fruit springing from the ghastly deed?

His Divine Grace A.C. Bhaktivedanta Swami Prabhupada explains that the alarming frequency of abortions, the killing of children in the womb, directly correlates to the mistreatment of cows. Those individuals who kill unnecessarily have the act returned to them in the next lifetime, as the spirit soul never dies. This is only fair. 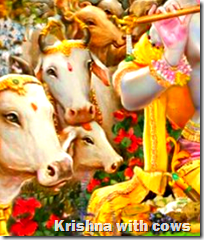 We know the importance of cows from the lila of Bhagavan described in Shrimad Bhagavatam and other places. When they are allowed to roam free, when they are cared for with love and attention, cows produce more milk than anyone can imagine. From those products a society’s basic economic problem is solved, bypassing the need for planning commissions and promises from dishonest politicians.

These are the scriptural works that are the foundation of the culture erroneously tagged today as Hinduism. In fact, there is no such word described in the Vedas. The principles presented are for the benefit of the entire world. The teachings are not applicable to only a certain race of people or those belonging to a division of faith.

“As the embodied soul continually passes, in this body, from boyhood to youth to old age, the soul similarly passes into another body at death. The self-realized soul is not bewildered by such a change.” (Lord Krishna, Bhagavad-gita, 2.13)

As an example, when Shri Krishna explains the travels of the spirit soul within an ever-changing body, He does not specify that only Hindus undergo this change. It would be something like stating that the law of gravity is only applicable to those attending the house of worship of a specific institution on a weekly basis.

The Vedas benefit everyone, even the person of ill-intent. With Hiranyakashipu there was a trace of deference to Vedic teachings in his supplication of Lord Brahma for the purpose of receiving boons. Ultimately, there was enmity, as to glorify the Supreme Lord is the underlying purpose of the hymns of the Vedas.

One word to describe this class of men is vipra. They are wise, in the truest sense. That is to say they can do more than just solve math equations or engineer cutting edge technology. They have the vision extended to the widest range possible, both in terms of time travel and seeing beyond the external.

As an example, a less-intelligent person sees another person and doesn’t realize the previous state of the body. They don’t understand that there was birth at a prior stage and that there will be old age, or deterioration of the body, in the future.

The person with intelligence gathered by experience and instruction automatically understands the past and future when they see a living being. An adult may be standing before them, but they inherently understand that the same adult was once so small that they could fit inside the womb of its mother. In the future the vital force within will leave for another body, discarding the present one.

The brahmanas in the real sense are the brains of society. They use the Vedas as the foundation to provide guidance for every person to make spiritual progress. Not everyone will achieve perfection in a single lifetime, but that doesn’t mean there is no hope. Envy of the brahmanas will cause doom for a variety of reasons, with one of them being the chance of receiving a curse.

The sadhu is the saintly person. They may not necessarily be in the acknowledged occupation of brahmana, but they are on the spiritual path all the same.

The sadhus abide by dharma, which are the religious principles, meant for uplifting every person, from young to old and woman to man.

Religious principles are ultimately for pleasing a single person: the Supreme Lord, who is the intimate friend of the living entity since time immemorial. At present that relationship seems lost, but basic remembrance is all that is required, as Bhagavan is always close by in the heart.

Hiranyakashipu was hostile towards all of these entities, and so his fate was sealed. He would receive the special benediction of having his punishment delivered directly by Bhagavan. This was not because of the envy towards God. So many have this rivalry since birth, but they don’t get the same benefit. They receive the proper reaction to their deeds distributed by nature.

Hiranyakashipu was hostile towards one of the greatest sadhus, Prahlada Maharaja. This happened to be Hiranyakashipu’s son, and at only five years of age he exhibited all the qualities of a saintly person. He was learned in the Vedas, respectful to the cows, demigods and brahmanas, and had so much love for the Supreme Lord that Bhagavan protected him directly from so many vicious attacks started by the father.

Envy in end leading to doom,

When towards innocent cow,

Mercilessly to slaughter how?

And Vedas benefitting me and you.

One who innocent Prahlada delivered.

Like Loading...
‹ Three Activities In Bhakti Which Are Ultimately Identical
Five Things Which Cannot Provide Protection Against The Consequences Of Vaishnava Aparadha ›

Categories: the story of prahlada