Four Situations Where Agreement Can Quickly Turn Into Disagreement

“When Hiranyakashipu saw that his child had fallen at his feet and was offering obeisances, as an affectionate father he immediately began showering blessings upon the child and embraced him with both arms. A father naturally feels happy to embrace his son, and Hiranyakashipu became very happy in this way.” (Shrimad Bhagavatam, 7.5.20)

With applications involving the editing of text there is a concept called, “What you see is what you get.” WYSIWYG for short, the idea is that everything shown during the development phase is how it will appear after publication. No issues with rendering. No unintended side effects. This means that you can more accurately position the various items as you are composing. You don’t need to constantly publish, edit and then re-publish. 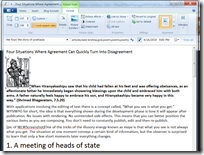 One of the tricks of the illusory energy known as maya is that what you see is not always what you get. The situation at one moment conveys a certain kind of information, but the observer is surprised to learn that only a few short moments later everything changes.

1. A meeting of heads of state

They chose a neutral site. Away from the security advantage of one nation over another, these two heads of state are at an important meeting. The subject is arms reduction. Each side has thus far raced to be in front, to make sure they have a larger arsenal than their rival.

The meeting is tough, with the respective sides threatening to walk out at various times, but the end is successful. That is the visual, anyway. The leaders shake hands, smile for the cameras, and field some questions from the press.

Amazingly, only a few weeks later the two nations are at war. The meeting went well, but afterwards something else happened to trigger the hostilities. It is as if the previous friendly exchange had no meaning.

They look so happy. They are embracing each other. After a long period of absence, they are together again. That is the way of life, after all. People come together seemingly at random, and then just like that they are separated. Who can explain why or how?

Yet a few moments later the same husband and wife are involved in a heated argument. The wife is throwing various objects found in the room, and the husband is dexterously avoiding injury. She is screaming this and that, and he is feverishly denying. How could things change so quickly?

You check behind you at the playground and everything looks good. One child is on the swing. Another is playing in the dirt. A third is climbing up and down a slide.

With your back turned to them, a few minutes later you hear yelling and screaming. Two of the children are fighting in the dirt. The other one is trying to intervene, but to no luck. Something caused the rift. Not wanting to share a toy. A harmless joke taken seriously. Invading of a space designated as territory.

Here we have a scene described in the Shrimad Bhagavatam. Prahlada Maharaja is wonderfully decorated to be presented before the father, who is the king. Hiranyakashipu was angry prior, when Prahlada spoke of the principles of self-realization, atma-tattva, but there were remedial measures. The teachers under the charge of the king went to work on setting Prahlada’s mind right.

The son maintained his respect. He was not spoiled. Appearing before the father, he fell at the king’s feet and offered obeisance. This won over the affection of Hiranyakashipu. The father took the son on his lap and was very happy.

Who could imagine that only a short time later Prahlada would be found in a pit of snakes? He would be thrown off a cliff, left to be trampled by elephants, fed poison, and taken into a fire. These were not unsupervised wanderings of a curious child. They were not tests of strength. They were not science experiments.

Hiranyakashipu’s mood changed to such a degree that he wanted Prahlada dead. Despite the outward respect shown to the father, the spirit of devotion to God remained. The teachers could not change Prahlada’s mind. The father might have thought he loved the son, but there were conditions.

That is the way of the material world, as every outpouring of affection involves some degree of expectation of reciprocation. The lone exception is bhakti, and for this reason devotion to God the person is not of this material world. The spirit remains always inside, since the individual is forever tied to Divine love. In cases like Hiranyakashipu, the original spirit flips to the point that there is intense anger.

Prahlada displays the mood of universal fraternity. He respects every person in the same way that he treats the father. Though Hiranyakashipu is antagonistic and full of the worst qualities, the saintly son only sees the connection to Vishnu, who is the one who saved Prahlada from every attack.

At end friendly with media greeting.

Or at playground the children fighting,

In this world discord quickly igniting.

Like Loading...
‹ Should We Not Want Gold And Soft Cushions
Five Characteristics Of A Place With Gold ›