Home › the three › Three Reasons Vedanta Is Difficult To Follow

“That knowledge of the field of activities and of the knower of activities is described by various sages in various Vedic writings-especially in the Vedanta-sutra-and is presented with all reasoning as to cause and effect.” (Lord Krishna, Bhagavad-gita, 13.5)

“I appreciate the effort you make. I mean that. The problem is, I find the content a little difficult to follow. I would love to read every single day, to make an attempt to go beyond life the way that pretty much everyone else lives it. But the concepts just seem beyond my reach. What should I do?”

Religion in general conversation has the connotation of faith. My religion against yours. My idea of God versus what some other group thinks. The belief in a certain kind of afterlife. The definition of salvation or redemption. Your belief that something else will happen.

Vedanta is a foreign concept since it applies scientific principles to the area of spirituality. The word is a compound of two others. Vedanta is the end of knowledge or the conclusion. Something like taking a massively complex proof in mathematics. The end is when you have nothing left to prove. Every component is effectively laid out and resolved.

2. Sanskrit words are difficult to understand

Vedanta falls down. It is like someone on a ladder at the top floor of a building. They reach into a window, grab a book, and then slowly pass that valuable object down until it reaches someone at the bottom, who is on the ground level. 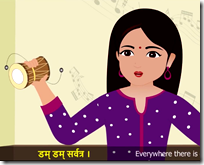 With Vedanta the transfer takes place through a chain of teachers. The original remains unchanged. The same sound vibration that was used to enlighten people living millions of years ago is there to be heard by the ears receptive to a higher way of thinking and living.

At the same time, Sanskrit is not spoken in common conversation. It is a difficult language to understand. One word could be a combination of five or six different terms, whose endings take on varied spellings due to the conformity required with the beginning sound of the adjacent words.

As if Sanskrit didn’t make the system complex enough, there are so many terms thrown around.

Atma, Paramatma. Individual soul and Supreme Soul. Kama and karma; material desire and fruitive activity. The cycle of birth and death. The three modes of nature. The three sources of misery. The three worlds. Theoretical knowledge and practical realization. The original Supreme Lord and His many expansions. The eternal being who lives in the spiritual sky and the same who descends to the manifest world from time to time. The materialized world and that which is beyond the range of sense perception. The knower of activity and the field of activity.

It is no wonder that a newcomer would feel overwhelmed. The good news is that such a thorough understanding is not required. A person can simply chant the holy names and work their way towards enlightenment: Hare Krishna Hare Krishna, Krishna Krishna, Hare Hare, Hare Rama Hare Rama, Rama Rama, Hare Hare.

The gopis of Vrindavana received direct praise from Bhagavan about their amazing connection to Him in yoga, and yet they were not interested. Their only concern was being with God and serving Him in a mood of love.

Shri Krishna is the end goal of Vedanta study. The educational discipline is not the end by itself. A person enlightened as such is typically better equipped to remain in the transcendental path, since they understand the pitfalls of material life and the association with ignorance. Such a wise person can also better explain to others the need for following a different way, for thinking beyond rigid ideology, sentimental allegiance, and blind faith.

“Looking for teachings to incorporate,

But a little too much to grasp,

Know that not necessary to go,

With chanting alone even so.

To connect with God the aim,

Gopis to high scholars the same.