Home › bhagavan › Some Guys Have All The Luck

Some Guys Have All The Luck

“Bhagavan means who possesses these six opulences in full: all riches, all strength, all influence, all wisdom, all beauty, all renunciation.” (Vishnu Purana, 6.5.47)

Material life is difficult. Shri Krishna says that the conditioned souls, the jivas, are struggling within that nature, which is inferior. In addition to the five senses, the mind causes trouble.

In the course of the difficulties, it is not uncommon to hear complaints resembling the following:

“You know, it seems like I have the worst luck. God, why does it always rain on me? I see other people who have everything go right for them. Job, family, looks, possessions – they have it all. I would take success in just one of those areas, but no. I am perpetually doomed. I will have to stay miserable for the rest of my life.”

One source of comfort is the Supreme Lord. Connecting with Him is known as yoga, and in that link the properties get shared. That is to say if God is always blissful and attractive, the same can be said of those devoted to Him. From His avatara of Shri Rama, we see that the name Bhagavan is befitting the origin of everything.

The Vedas give the name “Bhagavan” as applying to God. The literal translation is “the most fortunate one.” God possesses every bhaga, or opulence, simultaneously and to the fullest degree. This means that He has the best luck. Nothing goes sour for Him, even if the temporary situation may describe otherwise.

A famous incident involving Shri Rama is the bow contest held in the city protected by King Janaka. The pious ruler had the most beautiful daughter who came to him in the most unusual way. Deciding that she was too special to give away in a typical arranged marriage of the time, he held a svayamvara, or self-choice ceremony. 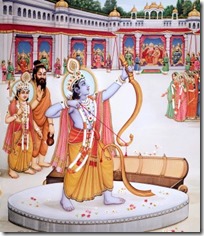 It was a contest. Whichever prince could first lift the amazingly heavy bow of Lord Shiva, which had been passed down several generations in the family, would win the hand of Sita Devi. How lucky was Shri Rama that none of the participants could even move the bow, let alone lift it? How fortunate was He to even be within the vicinity, escorted there by the spiritual guide named Vishvamitra?

Marrying Sita was appropriate. As Rama is an incarnation of Vishnu, Sita is identical to Lakshmi Devi, the goddess of fortune. An easy way to tell that God has the best luck is to know that He is married to fortune. He is the protector of fortune, and so He can shower unlimited blessings to others through her kindness and service.

Some years after marrying Sita, she went missing in the forest of Dandaka. It seemed like an unlucky situation, but then how fortunate was Rama to later come across Hanuman? If not for Hanuman, Sita may never have been eventually found. That dedicated servant in the body of a Vanara was uniquely qualified to cross over the vast ocean and reach the island of Lanka, the place to which the daughter of Janaka had been taken against her will.

The most loyal citizens

The people of Ayodhya eagerly awaited Rama’s return home. The schedule was fourteen years. They were so devoted that they initially insisted on following the son of Dasharatha to the forest. They were ready to give up home and live like ascetics, as long as they could be by the side of the person they loved the most. 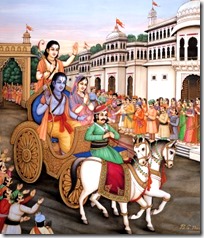 How fortunate was Rama to have such loyal followers, who were pious in every way? Who could ask for better younger brothers, who competed with each other to see who was willing to give up the most in their service to the eldest, the leader, agraja? They each rightfully earned the name Ramanuja.

The real-life events are one thing, but how will future generations share in the wealth of information presented through that lila, the transcendental pastimes of Bhagavan? How will they relive everything, as it happened? How will they connect with Rama in the same way that His contemporaries could?

Further evidence that Shri Rama has the best luck is seen in the quality of His biographers. There is Maharishi Valmiki, who composed the sacred Ramayana poem to immortalize the one person who is beyond the limits of time. That Sanskrit work carries forward to today, where devoted souls take joy every day in remembering the slayer of the demon Ravana.

There is also Goswami Tulsidas, who made the Ramayana accessible to the people of the time, those who may not have been able to understand Sanskrit. He composed one of the most widely sung songs in history, the Hanuman Chalisa, in praise of Rama’s loyal and courageous servant. There is the greatest luck surrounding that greatest of bow warriors, and anyone who connects with Him in a mood of love has no reason to ever be down, since they can rely on the shared fortune of the husband of Sita.

No reasons to be down,

Who bow into air projected.

That luck with His people shared.