Home › the two › Two Ways To Leave This World

Two Ways To Leave This World

“When the Personality of Godhead, Lord Krishna, left this earthly planet in His selfsame form, from that very day Kali, who had already partially appeared, became fully manifest to create inauspicious conditions for those who are endowed with a poor fund of knowledge.” (Shrimad Bhagavatam, 1.15.36)

Shri Krishna explains in the Bhagavad-gita that if a person only understands one thing, they will never have to suffer birth and death again. This single instruction explains the eternal nature of the soul and the variety in terms of its travel.

The living being will continue in its existence. It will always live. The natural follow-up question is, “What is death?” As it is a kind of departure from this world, there are two ways that it can occur.

1. Separation of body and spirit

To understand death, we can take a look at birth. This mysterious process takes place through the combination of two entities. One is the living force, chetana. The other is the material nature, prakriti. The union of man and woman perfectly symbolizes the process. The enjoyer represents the spark of life, and the enjoyed provides ground on which the expansion of the enjoyed can develop.

That development relates to the body. The explanation is that there are eight different elements, combined together to form a sort of covering. The combinations and proportions can vary, which is what leads to the variety in appearance known as species. 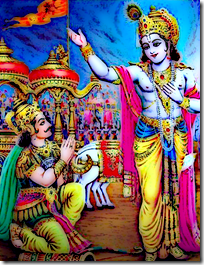 There are five gross elements and three subtle. Gross means that we can more or less see them. They are perceptible. The subtle ones are not. We have to take it on faith that there is a mind inside of a living being. The intelligence may be fully developed or totally covered, but it is always there. We know intelligence exists based on the natural tendencies immediately following birth, such as the horse galloping away and the infant sucking on the breast of the mother.

“I am seated in everyone’s heart, and from Me come remembrance, knowledge and forgetfulness. By all the Vedas am I to be known; indeed I am the compiler of Vedanta, and I am the knower of the Vedas.” (Lord Krishna, Bhagavad-gita, 15.15)

Whereas at the time of birth the elements get accepted, death is the opposite. Relinquishing that which was held onto for a certain duration. The time may be one hundred years or merely a few hours. There is no guarantee, either way, except for the inevitable end.

Spirit continues to live on, and what we refer to as reincarnation is the travel of the same identity into different body types. Each instance is called a lifetime or life, but this is an arbitrary demarcation of time. The soul is infinite in its existence. Sanatana; it has no beginning and no end.

2. Departing in the self-same body

This kind of departure is known as divyam, or Divine. Krishna describes His own janma to be in this category. So is His karma, which ordinarily gets understood as “fruitive activity.” Behavior which has consequences relating to the gross and subtle elements covering the individual soul – that is karma.

For the Supreme Lord the actions are divyam because there is never such a thing as a distinction between body and spirit. He arrives in His self-same form and departs in the same way. He does not succumb to death, and neither does He become entangled in the birth process.

Knowing His Divine nature is sufficient for stopping reincarnation. The reason is that true knowledge in this area has a commensurate shift in consciousness. That change in mentality equates to seeing the spiritual component to everything. It is understanding that even the material energy emanates from the Supreme Lord. 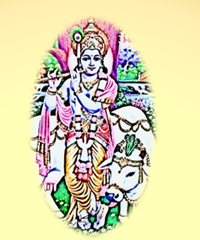 I may be forced to live in a temporary body today, but reincarnation is not a process to which I am hopelessly tied. The entire mechanism exists because someone created it. That person is above the system; hence the divyam description. Through understanding Him, the individual can return to their original position of divyam and thus never be forced to associate with temporary matter again.

After this body to receive,
Separated when to leave.

Since different identity for me,
Difficult from eyes only to see.

For Krishna another way,
So janma Divine to say.

Same to karma work extending,
This knowledge to liberation sending.