“Always chanting My glories, endeavoring with great determination, bowing down before Me, these great souls perpetually worship Me with devotion.” (Lord Krishna, Bhagavad-gita, 9.14)

They have other things they could be doing. It is not like they are helpless or lost in this world. They are not hopelessly searching for a direction, a reservoir for the service propensity. In fact, they hold positions of importance. Others approach them for benedictions. They know that these personalities are not ordinary.

Yet they have a specific preference. They do not mind their “day job”, so to speak, but it does not give them the highest satisfaction. Simply sitting down and listening, sometimes leading the discussion, on a specific topic – it is like nectar for the ears.

He is the great-god, Mahadeva. He has the most beautiful wife in Parvati Devi, the daughter of the mountain king. Though he takes part in two marriage ceremonies, Shiva really has only one wife. The vow is known as eka-patni.

“This bow is as fixed as Parvati’s mind. This bow is from Lord Shiva, who observes the vow to accept only one wife.” (Janaki Mangala, 93)

The first wife, Sati, intentionally leaves this world after her father, Daksha, offends her husband. Sati is reborn as Parvati, and as soon as she learns the destiny of being married to Mahadeva, she embarks on a journey to the forest to conduct austerities. She cannot be lured away, even by Shiva’s attendants sent with that purpose. They offer her Vishnu as a husband, but she politely declines; proving her exemplary devotion.

Mahadeva is also Ashutosha. He is easily pleased. Money, wealth, fame, good health – pour some water over his murti and expect results to arrive rather quickly. Perhaps offer a leaf and some nice prayers.

Despite so much going on, Mahadeva prefers to speak and hear Hari-katha. These are discourses on the Supreme Lord in the personal form. Shiva derives so much pleasure in this endeavor that he has disciples who carry forward a tradition.

He is the Vanara messenger whose deeds are well-documented in the historical work known as the Ramayana. Hanuman has accomplished more than anyone can imagine. He did so much by himself; without anyone helping him. He sacrificed personal comfort for the benefit of someone he barely knew.

The impetus for service is the connection to the Supreme Lord. Hanuman knows that Rama is someone special, that working for Him is not like any other kind of work. The truest indication is the lack of a personal motive. That is to say, after the work was completed, Hanuman wanted to continue to serve. 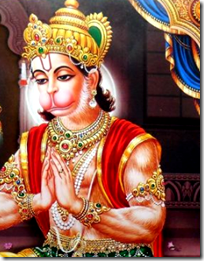 Though he is empowered to grant benedictions to others, Hanuman takes the most pleasure in reliving the pastimes of the Supreme Lord in His form of Rama. This is the worshipable deity of choice for Mahadeva, as well. Hanuman volunteers to remain in this world for as long as Rama’s glories continue to be sung.

One of the people in the chain of disciplic succession started by Shiva, Garuda hears Hari-katha directly from Kakabhushundi, the empowered crow. Garuda actually serves the Supreme Lord in His form of Vishnu. This is direct service; Garuda is the eagle-carrier. He is the enemy of snakes and he is always ready to serve.

In spite of such a high post, there is no false ego. There is great humility in being awed by the deeds, compassion and kindness of the Supreme Lord evident through the sounds of Hari-katha. These discourses are the preferred way to pass the time.

He is a saint within the brahmana occupation. This means that he can help others through the occupation exercised in six different ways. He can read the Vedas, pass on Vedic teachings to others, perform sacrifices, teach others how to sacrifice on a daily basis, accept in charity and also distribute the same to others.

Tulsidas takes advantage of the brahmana position to hear about the Supreme Lord Rama. He not only listens but also expresses his own sentiments through beautiful poetry in the Hindi language. This proves that devotional service is a living, breathing, active engagement. It is full of variety, and there is joy at every moment.

This king from a bygone era had everything going for him. He even had the fortune of knowing the moment of departure from this world. He had seven days’ notice, and he declined to simply enjoy the comforts afforded a royal majesty.

He instead gave up eating and sleeping. He remained wide awake while listening to the Bhagavata Purana recited by Shukadeva Gosvami. This was not specifically for achieving the best end of life; though that is the guaranteed result.

Saintly people are attached to Hari-katha precisely because of the joy it brings. It is a selfish endeavor, in a certain way, but it is the ideal example for everyone. Every person has the same potential for a blissful existence, provided they are fortunate enough to come in contact with the sound and recognize the transcendental nature to the association.

Special nature to its association,
On transcendental sound concentration.

Like Parikshit sitting down to hear,
Garuda to guru coming near.

Mahadeva despite duties to attend,
Preferred with Hari-katha to spend.

Example for entire universe set,
On how best enjoyment to get.

Like Loading...
‹ Five Endearing Offerings My Child Makes To Me
Five Things I Celebrate On The Anniversary Of Krishna’s Janma ›