Five Things I Celebrate On The Anniversary Of Krishna’s Janma

“Our dear Lord, You are appearing as the best of the Yadu dynasty, and we are offering our respectful humble obeisances unto Your lotus feet. Before this appearance, You also appeared as the fish incarnation, the horse incarnation, the tortoise incarnation, the swan incarnation, as King Ramachandra, as Parashurama, and as many other incarnations.” (Demigods praying to Krishna in the womb of Devaki, Krishna, The Supreme Personality of Godhead, Vol 1, Ch 2)

A child approaches their father and wants to know the reason for the celebration. What is taking place? The father immediately thinks back to Shri Krishna posing a similar question to Nanda Maharaja prior to what would be the inaugural Govardhana Puja.

“Why is everyone dressed up? How come we can’t celebrate right now? I am not sure I can stay awake until midnight. This seems like a lot of fun, but can you tell me the reason for the attention? Why does the celebration take place on a different day each year?”

The occasion is Krishna Janmashtami, which is the appearance day anniversary of Shri Krishna, the Supreme Personality of Godhead, in this world. The name of the festival references the specific day within the lunar cycle that the original event took place.

Devotees celebrate many things on this auspicious occasion, and the attention until the clock striking twelve at night is significant.

1. The courage of mother Devaki

She did not have it easy. Marriage should be a joyous occasion. Even in an arranged-style, there is the potential for wedded bliss. There is a lot to be excited over, in meeting a new partner and ideally remaining together for a long period of time.

Devaki had the pleasure of being escorted to her new family’s home by her brother. The festivities ended abruptly when Kamsa was prepared to kill her. This was for real. Not an idle threat to prove his intentions to others who might think of bypassing the laws of the state. Kamsa was the king of Mathura, so his example set the way.

Devaki survived the incident because her new husband, Vasudeva, interceded and spoke some sense into Kamsa. The king was paranoid because a voice from the sky warned him that Devaki’s eighth child would be the instrument of death, signaling the end. The asura feels deep sadness upon receiving such news, as they do not believe in the afterlife.

Devaki remained strong in spite of so much difficulty. Kamsa did not kill her, but he did imprison the newlyweds. Every new child was delivered to him, and Kamsa abruptly killed it. Still, Devaki remained firm until the eighth child finally did appear. He was none other than Shri Krishna.

2. The vision of the demigods

The actual exit from the womb does not signal the beginning of life. Any honest person acknowledges this, and there is further evidence through advancements in medical imagery. The demigods in heaven knew that Shri Krishna was with Devaki prior to birth. They offered nice prayers, as this is the etiquette when worshiping the Supreme Lord. The saintly class welcomes His appearance, for it purifies the atmosphere. Both sinner and law-abiding alike benefit from Krishna’s direct association.

3. The perseverance of Vasudeva

The moment of birth was joyous. It took place at midnight, while everyone else was asleep. Only the parents witnessed the miracle, and Krishna relieved any doubts as to His nature by revealing the four-handed form of Narayana. 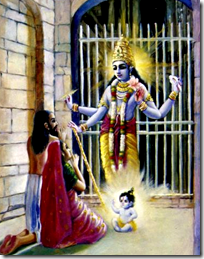 There was little time to celebrate, as the baby asked to be moved to the nearby town of Gokula in the interests of everyone’s safety. Vasudeva dutifully obliged. I do not mind it when my infant daughter repeatedly asks to be lifted up and carried around. I am not concerned over whether they will be spoiled. The bond of affection is such that I will honor most of their requests.

Vasudeva was the same way, but there were obstacles. A strong rainstorm and a flowing river called the Yamuna stood in his way. He persevered, however, holding baby Krishna above his head. The father and son received some assistance from Ananta Deva, who provided an umbrella-like protection over the same Narayana who was now in a child-like form.

4. The good fortune of Nanda and Yashoda

It is not an everyday occurrence to receive the Supreme Lord in your home as a son. The fortunate parents must have completed so many purificatory stages in the past. The same holds true for anyone who chants the holy names: Hare Krishna Hare Krishna, Krishna Krishna, Hare Hare, Hare Rama Hare Rama, Rama Rama, Hare Hare. Even if they belong to a low-class family at present, it should be understood that they are the most exalted. They have already connected with God, which means that so many pious credits were amassed from past deeds.

“Oh, how glorious are they whose tongues are chanting Your holy name! Even if born in the families of dog-eaters, such persons are worshipable. Persons who chant the holy name of Your Lordship must have executed all kinds of austerities and fire sacrifices and achieved all the good manners of the Aryans. To be chanting the holy name of Your Lordship, they must have bathed at holy places of pilgrimage, studied the Vedas and fulfilled everything required.” (Shrimad Bhagavatam, 3.33.7)

Nanda and Yashoda were blessed with Krishna as their son. Yashoda had the added fortune of being covered by yogamaya, which enabled her to think that Krishna was her son by birth. She loved Him so much that milk would drip from her breasts upon visual contact. She would sing songs about Krishna’s pastimes while working during the day.

5. The kindness of the Supreme Lord for descending

In this world of duality, there is every opportunity to forget God. Actually, many lifetimes can be spent inside of this illusion. Never a scarcity in such enjoyment, but the Supreme Lord is kind enough to grant opportunities for remembering Him. This is the best use of time, but we are so quick to forget or ignore. Through the annual Vedic calendar He reminds us to remember Him, which will bring auspiciousness from beginning to end.

On Janmashtami to celebrate,
The pure devotion to demonstrate.

Of mother and father in jail,
Vasudeva rapid waters to scale.

Yashoda her own son believing,
Blessings from yogamaya receiving.

So kind for our protection descending,
That glories to this day extending.