“Prahlada Maharaja continued: I received this knowledge from the great saint Narada Muni, who is always engaged in devotional service. This knowledge, which is called bhagavata-dharma, is fully scientific. It is based on logic and philosophy and is free from all material contamination.” (Shrimad Bhagavatam, 7.6.28)

In a verse in the Shrimad Bhagavatam, Prahlada Maharaja describes Narada Muni as a person who always sees the Divine [deva]. This confirms the truth that a spiritual master, guru, is a tattva-darshi, or one who has seen the truth.

Narada Muni gave both jnana and vijnana to Prahlada. Simply from hearing there was theoretical understanding and also the practical application of the principles. No field work required, as the bhagavata path is unique and superior in this way. On the occasion of Narasimha Chaturdashi, we celebrate the transfer of power, how Narada Muni gave Prahlada the same ability to always see the Divine.

Anyone can claim that they have jnana and vijnana. The actor wears a lab coat and pretends to be a scientist on the popular television drama series. Wearing the shirt and tie and sitting behind a desk in an important office, another person portrays the leader of a nation.

Prahlada’s jnana was evident in his instructions to the sons of Daityas. These were children of the demon-class, to which Prahlada also belonged. They congregated in school, to be taught on the ways of material life, for ascending to the highest levels of sense enjoyment.

Since Prahlada had contact with Narada Muni much earlier, during the time in the womb, in fact, the priorities were different. The child of only five years was focused on serving the Supreme Lord, Bhagavan. He wanted to impress the idea on to the other students, who were his peers.

Proof of jnana is in the presentation of the principles. If I can memorize certain formulas in mathematics and give the proper answers on a formal examination, it proves that I have learned the material. This is at least to the satisfaction of the instructors.

Prahlada proved vijnana through his unwavering determination in yoga. This was the field work; something like the scientist going to the laboratory to conduct experiments, to prove hypotheses. Prahlada accepted the jnana from Narada, but also acted on it. This is one of the reasons shravanam, hearing, is the most recommended way towards transcendence. It does not require much to practice, and the benefits are enormous.

Narada can pass on jnana and vijnana because he has seen the truth and continues to see it. He is a traveler of the three-worlds, and he can visit Vaikuntha anytime he likes. There he sees God in the four-handed form of Narayana, who is lying in rest. Comfortably seated on the serpent bed of Ananta-Shesha Naga, the Supreme Lord has His feet massaged by His wife, Lakshmi Devi, who is the goddess of fortune.

Narada carries that image wherever he goes, retaining the association through chanting the holy name of Narayana. Narada’s disciples are able to do the same, and thus they feel liberated even prior to quitting the body.

Proof of Prahlada’s amazing vision would arrive through the descent of the avatara known as Narasimha. Prahlada always saw Narayana, but the atheistic father refused to believe. He could not acknowledge Narayana as God. Otherwise, the life in pursuit of world dominance would be invalidated. All of Hiranyakashipu’s work would be in vain.

Narayana showed a direct vision to the doubting soul, who could have benefitted from accepting the valuable words of advice from the son. This vision wasn’t the same four-handed one seen in Vaikuntha. It was ferocious and awe-inspiring. It was a special version of kala, which is death. Kala is the way that every person eventually meets God, face-to-face. 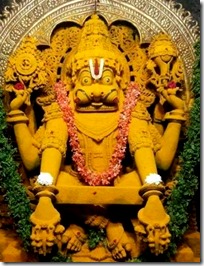 As angry as Narasimha was, because of the torture Hiranyakashipu had previously inflicted on the innocent Prahlada, it was an auspicious occasion, one that continues to be celebrated today. Narayana is the protector of the devotees, and He is never lost to them.

For world domination at any cost,
But for proper direction lost.

Since those words hearing,
And not to transcendence steering.

From saintly son heard,
But only further anger stirred.

Until death as Narasimha to descend,
Celebration to this day to extend.

Like Loading...
‹ Four Instances Of Marriage Difficulty In The Ramayana
If Marriage Is So Difficult Why Did God Make It An Ashrama ›