“Prahlada Maharaja said: My dear King, the source of my strength, of which you are asking, is also the source of yours. Indeed, the original source of all kinds of strength is one. He is not only your strength or mine, but the only strength for everyone. Without Him, no one can get any strength. Whether moving or not moving, superior or inferior, everyone, including Lord Brahma, is controlled by the strength of the Supreme Personality of Godhead.” (Shrimad Bhagavatam, 7.8.7)

Friend1: I think you mentioned one time about Shri Ramachandra, the avatara famously described in the Ramayana poem of Valmiki and the many Puranas compiled by Shrila Vyasadeva, that He tends to choose the weak over the strong.

Friend2: What is this in reference to? What is the purpose of the choosing, as you describe it?

Friend1: Oh, within the context of enlisting for service.

Friend1: Hmm, maybe something similar, but there aren’t people passed over, necessarily. Say that Rama has a task to complete. He requires assistance.

Friend2: That is a contradiction. Bhagavan is atmarama. Completely satisfied in the self. He has associates, but He certainly doesn’t need help in accomplishing tasks. Keep in mind that the entire cosmic manifestation comes together effortlessly. The Supreme Lord, as Vishnu, lies down on a serpent bed. The exhaling breath creates; the inhaling destroys. The time in between is quite extensive, according to human calculation, but for Vishnu it could be like a split second.

Friend1: I should clarify that it is the situation which calls for assistance. Rama creates a need through the primary acts in His divine play, lila.

Friend2: Okay, but why would He intentionally choose someone weak?

Friend1: Well, that is the reason for our conversation today. It doesn’t make sense. If I have an important task to complete, I will look for the most qualified candidates. If the work is not as important, maybe I will open an opportunity to an unskilled person, someone with potential. With Rama, we are talking about ruling a kingdom, searching the entire world for a missing person, or offering hospitality in a forest area.

Friend2: Again, why would Rama choose a weak person? 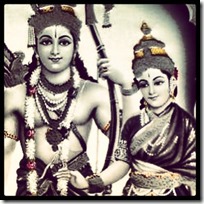 Friend1: You tell me. You are the one who brought it up, originally. Vibhishana was in a position of weakness, having left Lanka after a disagreement with his brother, Ravana. Sugriva was forced into exile on Mount Rishyamukha, afraid for his life against the rival brother named Vali. Guha was from a race considered too uncivilized to live in the city. The Vanaras in Kishkindha were something like a human-monkey combination. They certainly wouldn’t be your first choice to construct a powerful army.

Friend2: The reason Bhagavan doesn’t look for high qualifications is because He can turn the weak into the strong. Prahlada Maharaja confirms this in Shrimad Bhagavatam. He explains that the source of strength is the same in every person.

Friend1: What is the context of that statement? If the source is the same, why do we see some people are weaker and some are stronger?

Friend2: That is an illusion. Prahlada is explaining to his demon father, Hiranyakashipu, that Bhagavan is the source of strength in each of them. Prahlada is a five-year old boy. Hiranyakashipu is the leader of the Daityas, king of the world. 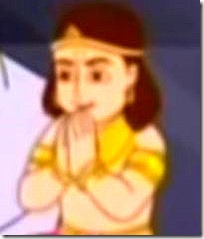 Friend1: It’s not true, then, that some people are weak?

Friend2: They have the same source of strength. In that temporary situation, the ability has not manifested to the level that it has in others, but the potential is identical. This means that Rama can turn an estranged brother into a powerful leader. He can transform a dedicated servant into a powerful warrior, one who can leap across oceans and carry mountains.

Friend1: This means that my insufficient qualifications do not immediately disqualify me from service.

Friend2: That service is the very essence of living, dharma, so how can it be denied? Whatever our stature, wherever we fall within the range of measured ability, the sincerity of purpose determines our standing in the eyes of the one person who sees everything. He also hears every prayer made to Him in earnest, such as with the chanting of the holy names: Hare Krishna Hare Krishna, Krishna Krishna, Hare Hare, Hare Rama Hare Rama, Rama Rama, Hare Hare.

Not high qualifications to seek,
Since turning strong even the weak.

As king by Shri Rama installed,
After brother his rival called.

So Sugriva to mountain clearing,
Vibhishana back to Lanka steering.

All boding very well for situation mine,
That even paltry devotion can shine.

Like Loading...
‹ How Are People Able To Go Through With Arranged Marriages
Is Offering Prasadam The Same As Saying Grace ›