Home › questions › Is Offering Prasadam The Same As Saying Grace

Is Offering Prasadam The Same As Saying Grace

“If one offers Me with love and devotion a leaf, a flower, fruit, or water, I will accept it.” (Lord Krishna, Bhagavad-gita, 9.26)

“You can put this into the category of correlation. Comparison in order to relate. A way to explain to others a practice of a culture that may be unfamiliar to them. I am trying to reach out to the open-minded. Not the ones who cling to a book out of blind faith, who consider anyone outside of their tradition to be heathens.

“Yes, I know some look at your practices as satanic. They will deride with accusations of ‘false gods’ and ‘idol worship.’ This dogmatic insistence is quite foolish, since any person can follow the same. After all, your sacred texts are much older. The Sanskrit language is the original of this universe, respected even within the Ramayana, as noted by Shri Hanuman.

“I am trying to get through to the inquisitive. Those who grew up in another faith but are sincerely interested in learning about the Vedic culture, particularly the bhakti division. I know that it is not a sect, that devotion to the real God is the true essence of our existence, but in terms of classification and esoteric study the bhakti school is considered distinct, different.

“The followers of the personal God prepare and offer food to Him. Not just any kind; that resulting in the least harm to the advanced living entities. No meat, fish or eggs. No onions and garlic. Matching the mode of goodness, sattva-guna.

“The formality of the offering is typically in front of a statue or picture, depicting the transcendental features of the Almighty, who is never limited to a single manifestation. For someone new to the culture, is it fair to compare the practice to saying grace? You know, where people seated at a dining table make a formal prayer prior to eating, thanking God for everything.”

Every person should be thankful for the higher authorities. Under the spell of illusion we think we have so much control over events, but it is actually not so. Shri Krishna explains that the living entity is not the doer. Material nature must first comply. An intelligent person realizes this, after basic study of the world around them.

“The bewildered spirit soul, under the influence of the three modes of material nature, thinks himself to be the doer of activities, which are in actuality carried out by nature.” (Lord Krishna, Bhagavad-gita, 3.27) 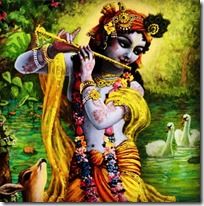 My very ability to witness what others do is dependent on external factors, which are beyond my control. I take for granted waking up in the morning, since it has occurred so many times in the past. No one is truly safe in this world, as there is danger at every step.

Thus for a family to pray to the man upstairs, to thank Him for the food on their table, is a sign of intelligence. The acknowledgment also indicates gratefulness. The individual should not be a miser, since nothing really belongs to them. Our possessions are merely on loan from a creator who himself must be empowered prior to conducting the work of the world.

Preparing food and offering in a mood of love to the Supreme Lord is bhakti. This is distinct from karma, which carries consequences to the material body, either good or bad. Favorable or unfavorable, but both relative. What I might think to be good for me, ends up hurting me in the long run. That sudden tragedy might end up benefitting me greatly in the future.

Bhakti will always be auspicious. Punya, and these meritorious credits don’t go to waste. The offered food becomes known as prasadam. This is God’s mercy. The entire practice is more than acknowledging or thanking. It is dedicated effort for the pleasure of someone else. It is accepting what is already provided, namely food, and directing it for someone else’s pleasure. 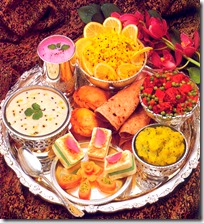 Prasadam has enough potency to liberate a person and those around them. I may take from God, give Him thanks, and then forget Him the next day. With prasadam, I am not expecting anything. Shri Krishna may accept and consume everything, leaving nothing for me. Whatever He likes, He can do, but that will have no impact on my future outlook. I will continue to stay with Him. Even if I am poor and destitute, with nothing to offer, I will sacrifice to Him my words, through prayers such as the maha-mantra: Hare Krishna Hare Krishna, Krishna Krishna, Hare Hare, Hare Rama Hare Rama, Rama Rama, Hare Hare.

Comparing to traditions other,
Is one different from another?

Like prasadam offering to place,
Is that same as saying grace?

Whereas in thanking to proceed,
Because of God providing need.

Like Loading...
‹ Why Doesn’t Rama Look For High Qualifications
How To Win The Game Of Dogmatic Insistence ›