Home › the three › Three Examples Of Chewing The Chewed

Three Examples Of Chewing The Chewed

“The embodied soul may be restricted from sense enjoyment, though the taste for sense objects remains. But, ceasing such engagements by experiencing a higher taste, he is fixed in consciousness.” (Lord Krishna, Bhagavad-gita, 2.59)

There is the saying that one way to identify insanity is when the same thing is done repeatedly with the expectation of a different outcome. A wise young child a long time ago said that practically everyone in a material existence would have to fall into this category; they fit the definition of crazy or insane.

“Prahlada Maharaja replied: Because of their uncontrolled senses, persons too addicted to materialistic life make progress toward hellish conditions and repeatedly chew that which has already been chewed. Their inclinations toward Krishna are never aroused, either by the instructions of others, by their own efforts, or by a combination of both.” (Shrimad Bhagavatam, 7.5.30)

The words used by Prahlada Maharaja were punah punash charvita charvananam. This means “chewing the chewed.” People do the same things over and over, especially since devotion to the Supreme Lord is not tried or believed in. The repeating cycle brings them no further along the path of liberation, which is the ultimate goal of life.

Examples are helpful in understanding a concept. There are many candidates for recognizing the pattern identified by the prodigy-like son of King Hiranyakashipu. In alcohol addiction there is a similar cycle. You have one drink. Then you have another. Soon you are at the point of intoxication. There is a temporary buzz, followed by regrettable actions.

When the entire night is spent standing above the toilet, vomiting or almost to the point of, a promise may be made. “Boy, I am never drinking again. It’s just bad news.” Inevitably, the cycle repeats. The same activity, with a predictable outcome, is indulged in, again and again, with the expectation of a different result.

Drugs and alcohol are known to be harmful, but what about having a passion for work? Going to the office, putting in a strong effort to create a new product to be sold to the masses. This will revolutionize whatever industry the product is for.

Even in the case of a very successful product launch, what is the end result? Does anyone use the first personal computers invented years ago? They are nothing more than museum exhibits now. With the smartphone, after a few years the models look old and dated.

Certainly there is progress being made; the new products pave the way for further innovation. At the same time, this defect is always there with progress. You can only move forward from something if that something is deficient in some way. Thus in the fever to create new and better products, the same experience repeats.

You’ve had it with this person. You didn’t sign up for this. There are plenty of jokes about the difficulties of marriage, but nothing like this. It’s time to get out. End the relationship. A clean break means a fresh start.

Inevitably, a new relationship comes. What starts out innocent blossoms into a romance. Yet since at the very foundation of the relationship is kama, or sense gratification, there is always the risk of the initial attachment turning into aversion. In the Bhagavad-gita Shri Krishna says that all living entities are born into this delusion, wherein they suffer from the dualities of attachment and hate.

The solution is in the verse spoken by Prahlada Maharaja. It is also provided by Shri Krishna. Find a higher taste. Chew something that never runs out of juice. Only bhakti-yoga meets the requirements. This is also known as bhakti-rasa, or the taste of devotion.

The truth has to be experienced to be believed. Prahlada Maharaja realized with firm conviction at a very young age, after first being instructed by Narada Muni. Prahlada tried to pass on the same wisdom to his friends during recess at school. He tried to help the demoniac father, as well, who was committed to chewing the chewed at the highest level, as king of the world. 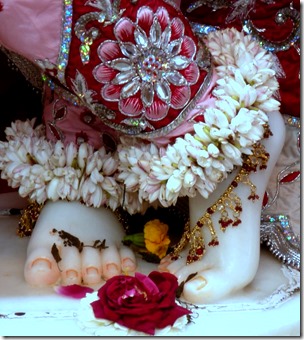 Whereas in material activities there is limited enjoyment due to the nature of kama, with bhakti the pleasure only increases with time. This is because God is Himself unlimited, ananta. There is never enough devotion, and there is never enough of His association. The more one chants the holy names, the more desire there is to continue: Hare Krishna Hare Krishna, Krishna Krishna, Hare Hare, Hare Rama Hare Rama, Rama Rama, Hare Hare. Whereas with chewing the chewed the result is rebirth, with bhakti-rasa the end result is liberation, wherein the higher taste continues to be experienced, with time no longer having a negative influence.

Same activity over to repeat,

With different outcome to seek.

This definition of insanity one,

Spared in material world are none.

For this reason child Prahlada to try,

To explain a higher purpose why.

In life not a moment to be wasted.

Like Loading...
‹ Three Reasons The Young Son of Hiranyakashipu Was Smarter Than The Father
Another Lesson On Humility ›