“When Krishna and Satyabhama were returning from the capital city of Indra, Satyabhama remembered Krishna’s promise to give her the plant of the parijata flower. Taking the opportunity of having come to the heavenly kingdom, she plucked a parijata plant and kept it on the back of Garuda.” (Krishna, The Supreme Personality Of Godhead, Vol 2, Ch 4)

Perhaps you tried on your own. You gave it the old “college try.” “A for effort” would be the grade, if there was a person providing an assessment at the end. “It just wasn’t meant to be,” you tell yourself.

Not giving up, you turn to prayer. Approach the person who is beyond everything experienced thus far. It’s like He is behind this giant curtain, just waiting to reveal Himself. For now, a little help will do. Increase the fortunes. Something is desired. It couldn’t be accomplished through personal effort alone, so some Divine intervention at this time wouldn’t be rejected.

The desirer of wealth is one of the four categories of people who initially approach God the person. The list is provided in the Bhagavad-gita, which as a spiritual text is unique in one way because it is spoken directly by God. There isn’t a conduit or a messenger. The work is like a direct transcript of a conversation. Previously, the two participants were just friends and relatives, but when the stakes were highest, the one friend decided to reveal His true identity, helping the other friend cross the ocean of nescience.

Though people have approached Him for meeting desires since time immemorial, the Supreme Lord, described as Krishna in the Bhagavad-gita, is not obligated to deliver. Otherwise, the interactions would be like business transactions. At the store if you offer sufficient payment and the desired object is in stock, the store hands it over. They don’t ask questions, such as what you intend to use the object for. They don’t make a character assessment and neither do they concern themselves with the future impact of the purchase on the customer.

Though Krishna is not compelled to give wealth whenever it is asked, He is known to be the most munificent towards His devotees. That is to say they are never in total poverty, to the point that they can’t practice what is most important to them: devotional service.

1. The fruit vendor in Vrindavana

The man behind the curtain revealed Himself to the world in the most attractive form, which had the complexion of the dark raincloud and lotus-like properties in several areas of the transcendental body, like the eyes, the feet, the hands and the navel. He was the darling child emerging from the womb of Devaki, but He quickly got transferred to the town of Gokula, where He would spend the childhood years as the foster child of Nanda Maharaja and his wife Yashoda.

In the farm community a fruit vendor was known to stop by the house on occasion. Watching the exchanges with the parents from previous instances, Krishna one time decided to make the payment Himself. He took some grains in His lotus-like hands and went towards the vendor. By the time He reached her, Krishna had dropped most of the grains. 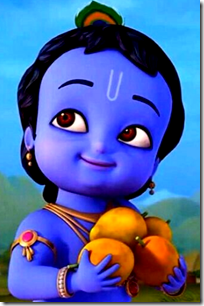 The vendor lady did not mind at all. She was ready to take a huge loss, as she placed as many fruits into Krishna’s hands as He could hold. The small child was delighted and so was the vendor. She later noticed that the contents of her basket had been transformed into gold and jewels. She was not seeking this, nor did she need the gift, but Krishna would not leave her empty-handed for her kind gesture towards Him.

Later on in the manifest pastimes, Krishna was an adult and ruling as king of the city of gates, Dvaraka. One time a friend from childhood came to visit. Though a poor brahmana, Sudama Vipra only made the trip at the urging of his wife, who knew the relationship to Krishna. She thought that maybe the king could help out their financial situation.

Sudama was too ashamed to ask for anything, especially after he was greeted like the most important guest in the palace. Krishna lived there with the chief queen, Rukmini Devi, who is an incarnation of the goddess of fortune. There was pure devotion from Sudama, and once again that sentiment did not go unnoticed. Rukmini Devi transformed his meager dwelling into a palace, solving the poverty problem. Sudama did not ask for this, but Krishna is known to be overly generous in this way towards His devotees.

3. The parijata flower for Satyabhama

One of Krishna’s other queens wanted a specific flower. Satyabhama desired the parijata flower, which is found only in the heavenly world. Though in Vedic culture it is considered improper for a wife to command her husband, for Shri Krishna the sentiments of His devotees are never suppressed. As He chased after the deer for Sita Devi in the incarnation of Shri Rama, Krishna did not hesitate in travelling to the heavenly realm to get the flower for His wife.

He ended up promising an entire tree, so that Satyabhama would be happy going forward. Indra, the king of heaven, was not happy about this. He put up violent opposition, but Krishna easily defeated the attackers. The demigods should know better, that God is the original proprietor of everything. But the modes of nature are such that even the wise lose the proper vision from time to time. 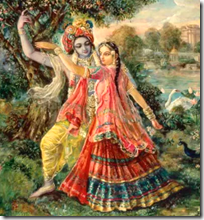 Taking the plant for growing a tree of flowers was not necessary, but it is in Bhagavan’s nature to be overly generous when the devotion is pure. This is because He knows the change in material circumstances will not have a negative influence. At other times He lives up to the name of Hari by taking certain things away. The devotee may cry and become angry, but like children who eventually mature and appreciate everything their parents did for them, the love for Krishna only increases.

Krishna, most munificent is He,

Evidence from several pastimes to see.

And gold contents of her basket making.

For Sudama the home into palace turning,

Parijata for queen from heaven’s way,

The surrendered never in want to stay.