“Taking you on my back, I will certainly cross over the ocean. Indeed, I have the power to carry Lanka along with Ravana.” (Hanuman speaking to Sita Devi, Valmiki Ramayana, Sundara Kand, 37.20)

It’s been a difficult time lately. It’s the first child, so all the mistakes are made here. Like being on call for your job for twenty-four hours a day, seven days a week, sometimes the parents reach a breaking point. In this situation the mother needs some rest. Just a four to five hour stretch where she is not bothered.

You dutifully step up. The father will watch the child. Sometimes it’s easy and sometimes it’s not. When the baby plays on the floor or goes outside for a walk, no problem. When they cry uncontrollably, you have to quickly figure out what is wrong. Feeding, diaper change, need to apply cream – what is the actual issue?

At one point the frustration mounts and you blurt out to yourself, “I only have two hands. There is only so much I can do by myself.” Indeed, that limitation is present in every single person. Some are more capable than others, but there is a limit to the burden one person can carry.

From the Ramayana of Valmiki we learn of a character of amazing shakti. This is potency, power or ability. His name is Hanuman, and from his deeds we see that the potency specifically manifests in relation to what he is able to carry. A historical personality, Hanuman’s motivation is equally as important as his exercise of ability.

1. Taking two noble warriors on his back

These men were of adult-age. The first time Hanuman carries them is right after initially meeting them. They are Shri Rama and His younger brother Lakshmana. Hanuman quickly learns that they are not ordinary, that they have the characteristics pointing to a Divine nature. He brings them to Mount Rishyamukha to meet Sugriva, the exiled leader of the Vanaras in Kishkindha.

Hanuman later places the same brothers on his back during a military battle. This is one of his preferred moods of service. Hanuman likes to offer physical assistance whenever the Supreme Lord or someone close to Him requires it or when it might help them.

This is a hypothetical, proposed by Hanuman. He went to the island of Lanka, inhabited by Rakshasas, to look for Rama’s missing wife. He found Sita Devi in a grove of Ashoka trees, and seeing her distress he thought for a second that it might be wise to not wait.

That is to say instead of just going back to Rama and Sugriva with news of her whereabouts, he would carry her on his back and bring her to safety. She should not have any doubt on the matter, as Hanuman has the necessary shakti and more.

3. Bringing back Lanka and Ravana

Indeed, sufficient shakti is there to bring back the entire Lanka, which includes the king Ravana. This would be a drastic measure, but Hanuman is ready to do anything to please Shri Rama and family. This is the definition of pure devotion. No motivation and no interruption, and the use of every ability when and where appropriate.

Sita Devi declined the offer, and for two reasons. She did not want to have contact with a man other than her husband. She also wanted the glory of her rescue to go to her husband, who was in the warrior order of life. It might not look so good if someone else has to accomplish Rama’s most difficult tasks. Not that the Supreme Lord would really mind, but in that particular role the reputation of the Raghu dynasty to properly defend was important to maintain. 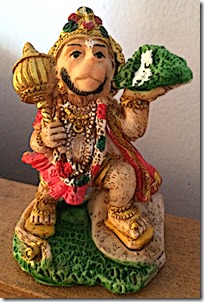 In the subsequent battle with Ravana, Lakshmana received a serious injury requiring a specific herb. Hanuman took the mission to find that herb, and in the process he brought back an entire mountain. This was not to show off, but rather to pay respect to the time limitation and the urgent need for medical assistance.

5. Accepting the pressure of success in a difficult mission

Indeed, the entire mission was a great burden placed on his shoulders. In the end, it was only Hanuman who had the chance to succeed. He was in Lanka all by himself. His friends and well-wishers were counting on him. Hanuman would rather quit his body than return a failure. Not because of the damage to his own stature, but because of the distress caused to those he cared deeply about.

His great devotion to Rama was the necessary ingredient to success. Though the conditioned living entity is limited in ability, they have the chance to consult the same powerful Shri Hanuman for help. His blessings pave the path towards returning to the spiritual world, where the company of Shri Rama and others is enjoyed eternally.

With original source his bhakti,

To bring back princess over ocean too.

Lanka and Ravana if needed,

Difficult journey since limited are we,

Ready to help in reaching Rama is he.