Home › ramayana › sundara › 37 › Something Not Shown To Everyone

Something Not Shown To Everyone

“The intelligent one, the best of the monkeys, jumped down from that tree and then began to increase his bodily-form on account of giving proof to Sita.” (Valmiki Ramayana, Sundara Kand, 37.34)

It was at Arjuna’s request. The celebrated bow-warrior was moments prior in great doubt, unsure of how to proceed in a very important matter. The fate of the world rested on his decision. It would either descend into adharma because of poor successive leadership, under the control of the wicked Duryodhana and his clan, or it would prosper under the spotless dharma adhered to by the elder brother, Yudhishthira.

Fortunately for Arjuna, the wisest person was sitting right next to him. Though typically considered a menial role, someone who is accustomed to hearing orders barked in the ear, told with force to turn this direction and that, Partha’s sarathi was no ordinary person.

Many of the verses describing their subsequent conversation begin with the Sanskrit words shri bhagavan uvacha. The meaning is that the Supreme Personality of Godhead is speaking. That charioteer is none other than the Supersoul residing within the heart of every living being. The same person lying in rest in the spiritual land of Vaikuntha, who effortlessly creates and destroys universes through His breathing, was there to remove Arjuna’s doubts.

After hearing the highest philosophy, and knowing for sure that Krishna was indeed Bhagavan, Arjuna wanted some proof. He considered that future generations might not believe, that any two people could have a similar conversation and then present the teachings as originating with the Almighty.

Visual evidence is for the less intelligent, as a wise person receives perfect knowledge just from hearing. As an example, a child is learning to crawl. They have discovered that moving around in that manner can get them to different places around the house. The parents see that they have developed an interest in the electrical outlets. They give a stern warning. “No! Do not go there.”

That information is enough. No detailed explanation is required. If the child simply listens, they will be benefitted. The doubting soul will want visual evidence. They will want to see the effect of placing a hand in the socket. Though such an experiment is dangerous to conduct, something similar will suffice, like an electrical spark of some sort.

Arjuna asked to see the virata-rupa, the universal form. The person sitting next to Him had two hands, was all-attractive, and looked like a youth just entering the teenage years. This was despite Krishna having been on earth for more than one hundred years at the time. The Supreme Lord agreed to the request. He packed everything that a person could imagine into a single visual. The complete everything, as best as can be understood, was shown on the battlefield of Kurukshetra. Though originally for Arjuna’s eyes, the documented accounts would live on into the future, so that any doubts as to Krishna’s nature would be eliminated.

Many years prior, but still during the time of Arjuna and his brothers roaming the land, there was a meeting where another person requested to see an unusual form. This came from Bhima, one of Arjuna’s brothers. Born of the wind-god, Vayu, he met with Hanuman, who has the same lineage.

Bhima and Hanuman were thus brothers, and in that meeting the best of the monkeys prevented Bhima from entering an area that would have caused great harm. Blessed with the chance of interaction, Bhima requested to see the large form that Hanuman was famous for, the one that crossed over the ocean to reach Lanka in search of Sita, the wife of Shri Rama. Hanuman danced around the issue as long as he could before finally acquiescing.

In the above referenced verse from the Ramayana, we see Hanuman displaying the same form. This time he was not asked. The purpose of the transformation was proof. After receiving a slight insult from Sita in response to the proposal to take her back to Rama via the aerial route, Hanuman wants to prove his capability to her. Perhaps if she sees his form, she will be a believer.

Sita Devi, who is the goddess of fortune, knows very well Hanuman’s abilities. Shri Rama is the inspiration, and He is the same Krishna who helped Arjuna. Thus the display of the amazing form was to delight future generations, who never tire of meditating on that best of the monkeys, who is also supremely intelligent, dhiman.

Up until this point in time Hanuman had been very careful to remain undetected in Lanka. It was an enemy territory, after all, a place populated by man-eating ogres of the tendency towards depravity in the shadow of their leader, the wickedest character of them all. Yet Hanuman did not hesitate to enlarge his form in the Ashoka grove in order to win Janaki’s favor. 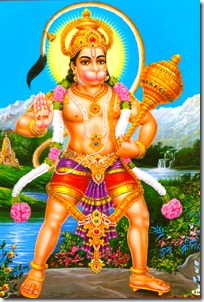 The objective of furthering Shri Rama’s interests is more important than anything to Hanuman. The dedicated servant takes every risk to please the Supreme Lord, and for this that Divine couple remains forever grateful to him.

After highest wisdom to receive,

Request so others would believe.

That Divine one next to Him seated,

So future generations not to be cheated.

Despite Sita his potency well knowing.

Enlarging to size that ocean over crossed,

And aside every obstacle tossed.