“O chief of the Vanaras, who can withstand Rama, the destroyer in battle, fixed in determination like the elephants of the quarters of the earth, whose arrows resemble the rays of the sun at the end of a yuga, along with Lakshmana?” (Sita Devi, Valmiki Ramayana, Sundara Kand, 37.65)

It is said that nothing is as forgiving as the earth. It bears such a burden based on the moving population alone. There are also the nonmoving beings, achara, who at the very least add weight to the total. There are earthquakes from time to time, but the earth does not give in. She is a mother who is tremendously forgiving.

“O Lord of Koshala, even the Earth, who is the mother of the world and respected by everyone, suffers distress in the form of earthquakes.” (Lakshmana speaking to Lord Rama, Valmiki Ramayana, Aranya Kand, 66.10)

It is easier to have a generally pleasant disposition towards everyone when there isn’t trouble. Yet the earth has to suffer so much, including during times when the sinful, the asuras, rise in strength. Their impious behavior adds to the burden, but again the noted planet in the region of birth and death remains steady.

One of the reasons is that there is support from underneath. The Vedas describe that the four quarters have these amazing elephant-like beings standing in support. This ensures that such a massive collection of matter stays in place, that it does not simply fall out of the sky. These pillar-like elephants can be relied upon. Whether accepted as truth or discounted as mythology, there is no denying that a stabilizing force exists ensuring the proper continuation of life on earth.

As Sita Devi describes in the Ramayana, Shri Rama is the same way on the battlefield. He cannot be moved. The enemy can have many capable fighters attacking simultaneously, but Rama will not budge from His position. This is because the arrows released from His bow are like rays of the sun. An enemy once compared those weapons to heat-seeking missiles, which chase their targets until a strike is realized.

“Neither the demigods nor any exalted personalities were there helping Rama, for He acted alone. You should not entertain any doubt on this matter. Indeed, Rama shot feathered arrows, plated with gold, which turned into five-headed serpents that devoured all the Rakshasas. The Rakshasas were oppressed with fear, and wherever they went and wherever they turned, they saw Rama in front of them. In this way, O spotless one, have your Rakshasas been destroyed in the forest of Janasthana by Rama.” (Akampana speaking to Ravana, Valmiki Ramayana, Aranya Kand, 31.18-19)

In times of distress it is nice to have reliability. The journey through life is indeed a struggle. At the very minimum there is the influence of time, kala, which guarantees change.

Even if a person is living seemingly worry free, there could be issues for friends and family. One day the father has a health problem. That gets compounded by another, in a series of attacks over the span of a few years. The mother suffers a traumatic event. They can no longer take care of themselves. You need help, as you have other pressing responsibilities on a daily basis.

If someone within the family steps in and helps out, it is a tremendous benefit. This person can be relied upon. They are not phased by danger or uncertainty. They have concern for the future outcomes, but they are not crippled by fear. They cannot be shaken in their resolve.

As Rama is that way on the battlefield, so are His dear servants like Hanuman. In addition to being an individual of extraordinary ability, Hanuman is completely dedicated to the Supreme Lord. He is in constant yoga, though he may not necessarily be found in the seat of meditation. He may be leaping over an ocean, contemplating strategy on how to proceed forward, becoming diminutive in size, or proposing an idea for rescue to a princess in great distress. 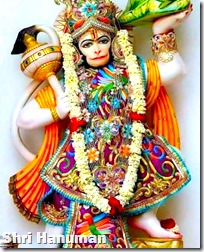 Who wouldn’t appreciate such a friend? Moreover, who would ever think of relying on anyone else when Hanuman is there to offer service? It is no wonder that Sita and Rama hold him in such high esteem. He continues in that devotion to this day, and the souls struggling in the material world can count on him to deliver the end result of pure devotion. Just remembering him and honoring bring so much auspiciousness, and he is obliged to stay with those who desire his association. Hanuman is as reliable today as he was when risking everything for the safety of Rama’s wife, who was otherwise suffering so much.

A pillar Rama in way the same,

Steady in battle with arrow’s aim.

Who taking every risk for Bhagavan.

No wonder held in such high esteem,

Dedication to a level never seen.

Like Loading...
‹ Three Amazing Things Moms Are Known To Do
What Is Wrong With Service To Man ›