“Once Bhima was administered poison in a cake, once they were put into the house made of shellac and set afire, and once Draupadi was dragged out, and attempts were made to insult her by stripping her naked in the vicious assembly of the Kurus. The Lord saved Draupadi by supplying an immeasurable length of cloth, and Duryodhana’s party failed to see her naked.” (Shrila Prabhupada, Shrimad Bhagavatam, 1.8.24 Purport)

For proper professional development others advise to not remain at one job for too long. It is something like the game with car insurance. Once you sign up, they won’t really offer any discounts moving forward. The only way to get a substantial rate reduction is to shop around for a different vendor. They will make an extra effort to lure you away, a means of attracting your business.

Within a particular field it might be better to shift every three years. Find some place where your skills are in demand. Since you are actively working at the time, the new company is compelled to sweeten the pot, so to speak. Repeating the process on a periodic basis ensures a steadily increasing annual salary.

On the other side of things, with your case you didn’t really follow any of that advice. You were fine with the first job. Plenty of freedom to learn new things. No strict adherence to schedules. Enough work to keep you occupied throughout the day; you were always surprised to see the clock showing that the day had ended.

As they say, all good things must come to an end. You had to move on. It wasn’t your decision. Business in the material world is not certain. The company could be around for over a hundred years, but one zealous and corrupt government prosecutor can slap on an indictment without any evidence, and the news is enough to sink the establishment. In other cases, the rapid evolution of technology renders your company’s particular good or service obsolete.

Being an aspiring devotee of the Supreme Personality of Godhead, your biggest concern is not over transition in work environments. You will be able to adjust. The issue is remembrance. Will you be able to continue with a devotional mindset? In a foreign place, not knowing a single person, scheduled to work for a set number of hours each day, how will you get the opportunity to remember the person to whom you owe everything?

Fortunately, the unwanted situation of starting a new job is not the most difficult to have arisen over the course of history. The Vedas document countless situations where devotees faced tremendous hardship and were still able to stay connected in yoga.

This took place in the land of Gokula-Vrindavana. The cowherd boys were out playing, as usual. Nothing new on this particular day except suddenly a huge fire was ready to consume them. They had no other hope except to think of Krishna, who had been their savior before. 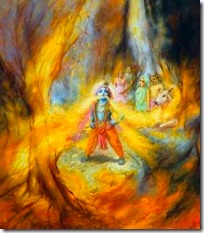 The residents of that farm community were not aware that their life and soul was actually Hari Himself. Shri Krishna chose to descend to earth and live in that specific land because of the good qualities in the people. Dangerous moments were only temporary in nature and lacked any real potential to harm. Something like a snake without fangs, the fire was no match for the mouth of Krishna, who saved His friends by devouring the blaze.

Draupadi was married in all righteousness, dharma. A special situation, she actually had five husbands. They were of the kshatriya order, which meant that by both quality and occupation they could protect others from injury.

If that was the case, what happened in the assembly of the Kurus? Draupadi was on the verge of being shown naked in front of everyone. Against her will the culprits wanted to embarrass both her and the Pandavas. Her husbands could not help since the punishment was tied to losing a bet.

Having no one else to intervene, Draupadi called out to Krishna. Just like with the forest fire in Vrindavana, He came to save the day. This time He took the form of an unending sari. No matter how much the Kauravas tried, they could not completely remove Draupadi’s sari.

Why is it that those closest to the Supreme Lord tend to find the most distressing situations? Here Sita Devi was in the kingdom of Lanka against her will. Since she would not give in to the advances of the evil king named Ravana, the punishment was constant surveillance and harassment by female man-eating ogres.

Even if you have a stressful day at work, at least there is the high likelihood of being able to sleep at night, uninterrupted. Sita had no such comfort available to her. Despite the dreaded circumstances, she was still able to remember her husband, Shri Rama. He is also Hari, appearing on this earth in the Treta Yuga to deal with bad characters like Ravana.

The idea is that making a sincere effort in spiritual life does not necessarily mean a person will be able to perpetually remain in a peaceful and quiet setting like a temple. They may have the opportunity to always chant the holy names: Hare Krishna Hare Krishna, Krishna Krishna, Hare Hare, Hare Rama Hare Rama, Rama Rama, Hare Hare. They can congregate with other like-minded people and enjoy discoursing about the Supreme Lord and His pastimes.

“The thoughts of My pure devotees dwell in Me, their lives are surrendered to Me, and they derive great satisfaction and bliss enlightening one another and conversing about Me.” (Lord Krishna, Bhagavad-gita, 10.9)

At the same time, life might toss them into this difficult situation and that. Whatever the case, God can always be remembered. That is the way to a pure consciousness, which has the attached reward of liberation after death.

Ability to focus on interest higher,

Life much easier in time prior.

But now into distress thrown,

To remember Krishna how when?

Moments from past supporting then.

And blaze into mouth Krishna sending.