Why Would Someone Be Offended At Krishna Being Called A Magician

“My dear Krishna, Your Lordship has protected us from a poisoned cake, from a great fire, from cannibals, from the vicious assembly, from sufferings during our exile in the forest and from the battle where great generals fought. And now You have saved us from the weapon of Ashvatthama.” (Queen Kunti, Shrimad Bhagavatam, 1.8.24)

Friend1: One time I was at an assembled gathering and someone was explaining the Draupadi sari incident.

Friend2: You were with devotees?

Friend1: Sat-sanga. Discourse on topics related to the Supreme Personality of Godhead, Bhagavan. The speaker was of the proper qualification, if that is what you are asking.

Friend1: In their lengthy discourse, they casually mentioned that Krishna is something like a magician in the way He can help people.

Friend2: Yes, the sari on the body of the princess became ananta. The limited transformed into unlimited. The people witnessing had no idea. They could not believe that Draupadi was wearing such a garment. 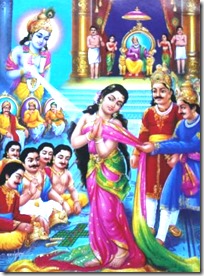 Friend1: It was because she called out to Govinda for help. He is the well-wisher of the devotees, though He stands in a neutral position at first:

“I envy no one, nor am I partial to anyone. I am equal to all. But whoever renders service unto Me in devotion is a friend, is in Me, and I am also a friend to him.” (Lord Krishna, Bhagavad-gita, 9.29)

Friend2: The other side was aligned with adharma, irreligiosity. That is why Govinda did not favor them.

Friend1: An odd thing occurred at this meeting. One of the audience members took offense. They aggressively questioned the speaker in response:

“Are you saying that Krishna is a magician? Do you think that is a proper comparison to make? What are you trying to say, then?”

Friend1: Why would someone take offense to that, though?

Friend2: A magician is a master of illusion. They aren’t really sawing that person in half. They didn’t actually produce a bunny rabbit from a hat. 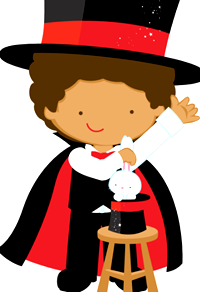 Friend1: And that coin wasn’t really behind my ear the entire time.

Friend2: Yes, so they can create illusions very nicely. The audience understands this going in. They want to be entertained in that manner.

Friend1: Isn’t maya illusion, though? Isn’t Krishna responsible for maya’s potency? Aren’t most of us enthralled in this show that carries on in virtually every aspect of our lives?

Friend2: Absolutely. He is a magician in that way, for sure. I think maybe the person was offended because Krishna didn’t actually fool anybody with the sari incident. He is capable of producing something out of nothing. That is the origin of the world, in fact, except what we think of nothing is known as the unmanifest. Just because we can’t perceive it doesn’t mean that it doesn’t exist.

Friend1: It is therefore something created from something, but we don’t know what that original something is.

Friend2: Exactly. Krishna is Yogeshvara, the master of all mystic power. He can save Draupadi from shameful harassment from the Kauravas. He can enter the womb of Uttara and protect King Parikshit from danger. He can show the entire universe inside of His mouth to a concerned mother Yashoda. Best of all, the illusion that has full control over me right now can be eliminated through Krishna’s help in the form of the holy names: Hare Krishna Hare Krishna, Krishna Krishna, Hare Hare, Hare Rama Hare Rama, Rama Rama, Hare Hare.

Sari for Draupadi extending,
That magic of illusion pretending.

But potency from Him real,
Depending on desire to reveal.

For understanding to get,
That always above maya set.