Four Reasons Prahlada Could Have Been Angry With God

“The Supreme Personality of Godhead said: My dear Prahlada, O most pure, O great saintly person, your father has been purified, along with twenty-one forefathers in your family. Because you were born in this family, the entire dynasty has been purified.” (Shrimad Bhagavatam, 7.10.18)

It is not difficult to find reasons. Any grievance, any issue, any dislike, any discomfort – lay the blame at the feet of the one who is lotus-like in many features. His hands are soft and delicate. They enjoy dipping into the butter carefully churned by a loving mother Yashoda. 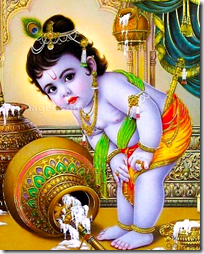 The eyes are like lotus-petals, presenting a wonderful image for the residents of Vrindavana to behold. The navel is also lotus-like, leading to the name Padmanabha. That navel is something like the cause of creation, as the stem of a lotus-flower which grows from it gives birth to the four-faced Lord Brahma, who is tasked with creating the world and populating it.

The feet are also lotus-like, and they are worshiped in the physical form in the temple and also through meditation within the mind of the yogi. Those feet are the servants of the Supreme Lord, and to become the servant of the servant is a great blessing.

But in this world of illusion it is easy to forget the person of those lotus-like features. A plethora of complaints, ranging from family issues to insufficient pay at work. The weather has been foul for a week and the traffic on the roads is unbearable. The pizza we ordered last night was not up to standard.

Prahlada Maharaja is an interesting case. He had significant justification for being upset with the Almighty, but in every situation his appreciation and gratefulness only increased.

1. You put me in a family of Daityas

Prahlada could have complained as follows:

“Bhagavan, why did you put me in this family? Our ancestry is nothing to boast about. The word Daitya refers to the woman named Diti. It is from her womb that the demon race sprung. Not demon just in the way the body looks. We’re talking about character here. Attracted to adharma, or the wrong way of doing things. This is the worst kind of birth a person can imagine.”

2. You forced me to be taught by cheaters

“I get it that children typically don’t prefer to go to school. They would rather play during the day. In the modern age, watch television. Eyes glued to video games. Run around the backyard. Not only am I forced to go to school, but I’m being taught by bad people. They are interested only in material life. I have no concern for the temporary. I have to sit here and endure this inaccurate or incomplete information. Since I am a child, I have no way of fighting back.”

3. Narada was around only before I was born

“Yes, thank you for that blessing, at least. Narada Muni, your wonderful servant, instructed the imperishable science of transcendental living to my mother while she was pregnant with me. Somehow I retained that information upon taking birth. That explains my inclination towards bhakti-yoga.

“Don’t think I will let you off the hook so easily. Where is Narada now? Where are the sadhus to give me sanga, association? Everyone left me. I am the lone devotee of Vishnu in this community. Not fair.”

4. You gave me the father from hell

“Nope. I literally have the father from hell. He is upset at my choice in favor of bhagavata-dharma. He does not like to hear Vishnu praised. He is so upset at basic words I am speaking that he tries to kill me. I have survived by meditating on you, but how many times does this have to happen? Why did you give me the worst father a human being could imagine?”

Instead of complaining, Prahlada saw everything as a blessing. This was not a contrived or illusory view. It was the actual truth of the situation. There was the opportunity to remember. Queen Kunti prays to have the many calamities previously faced repeat again, for they trigger reliance on Shri Krishna.

“I wish that all those calamities would happen again and again so that we could see You again and again, for seeing You means that we will no longer see repeated births and deaths.” (Queen Kunti speaking to Lord Krishna, Shrimad Bhagavatam, 1.8.25)

Prahlada remained calm and steady. His unalloyed devotion was rewarded with darshana. He saw the Supreme Lord face to face, though he was previously connected just the same. Hiranyakashipu received the proper punishment, and the material miseries ceased for Prahlada, though he had tolerated them without issue.

When audience of God to gain,
Forward with many words to complain.

Like Prahlada with demon birth,
Father from hell the worst.

But actually as blessing received,
Of Vishnu’s protection believed.

Like Loading...
‹ Three Things Working Against The Vanaras In Kishkindha
Springing From A Spark Of His Splendor ›