Home › bhagavan › Springing From A Spark Of His Splendor

Springing From A Spark Of His Splendor

“Know that all beautiful, glorious, and mighty creations spring from but a spark of My splendor.” (Lord Krishna, Bhagavad-gita, 10.41)

Take the person praised for their work at the office. Previously employed at a small firm, they had to do everything IT-related by themselves.

No project manager to coordinate things. No support staff to review the code. No extended period for testing, within an isolated environment. Whenever the business asked for something, this single person on the other side had to handle everything themselves.

They had to create a timeline. They had to test the changes in their own way; as the business lacked resources for building separate server environments. The developer was in charge of deploying the changes to production, to make sure that the currently functioning process did not suffer as a result of introducing changes.

When this same person later shifted to a larger company, the colleagues became amazed at their output:

“How are you able to handle so many projects simultaneously? That thing you just completed – previously there was a team of three. They took twice as long as you took to complete tasks, and they needed to be on hand afterwards to deal with any issues.

”Moreover, you don’t seem to be stressed by any of it. You crank out code like it is produced on an assembly line in a factory. You handle phone calls with politeness and it seems that you are never flustered. Pretty remarkable.”

The person on the receiving end feels good to be complimented, but this entire time they were thinking that not enough was being done, that the projects were completed too slowly. In fact, they know that they are capable of more since they have delivered under greater pressure and weight of tasks at the previous job.

You can walk around this entire world and similarly marvel at the amazing complexity and how everything comes together. Who would have thought you could get so many people at the train station at one time? How does nature make sure that people have enough food to eat? The sun provides us everything, and we can rely upon it. No one can make it rain on a particular day, but it eventually arrives when needed.

Shri Krishna says that this entire universe represents but a spark of His capabilities. Bhagavan tells the truth in the Bhagavad-gita. This whole world is nothing compared to Him. He accomplishes the work very easily. There is both symbolism and truth to the image of Narayana lying down and breathing. This form of the Supreme Lord, showing the personal side with transcendental features, creates universes through something typically considered involuntary.

The exhaling breath creates the universes and upon inhaling everything returns into Him. No sweat off His back. No difficulty and no reason to be angry at how the population within those universes behaves. They are free to do as they wish, but when they turn back towards Vishnu’s direction they get the best reward.

The turn can start with appreciation. This is known as shanta-rasa. Worship in neutrality, but at least worship. It is superior to foolishly thinking that everything came together randomly or that some high commission can institute rules that will magically change the climate or the living conditions on earth. 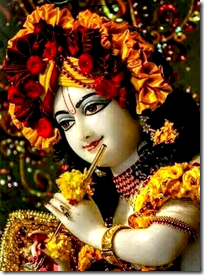 Humbly to pray,
That always to stay.

And not away to drift,
Towards argument and rift.

That randomness thinking,
And into ignorance sinking.

Whole world but just a spark,
Appreciation of Krishna the start.

Like Loading...
‹ Four Reasons Prahlada Could Have Been Angry With God
Three Aspects Of The Body Impacted By Anger ›